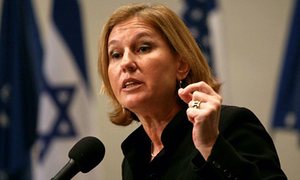 On 23 June 2010 a group of victims filed a complaint in Belgium with the Federal Prosecutor against certain Israeli civilian and military officials at the time, including Mrs Tzipi LIVNI, for war crimes and crimes against humanity committed in the Gaza Strip.

The complainants asked the Federal Prosecutor this week for the arrest of Mrs. Tzipi LIVNI when she steps off the plane on her arrival in Belgium on 23 January.

The Federal Prosecutor’s Office confirmed that Mrs Tzipi LIVNI would be intercepted by the Federal Judicial Police during her stay in Belgium to be heard and questionned following the complaint lodged against her and that it would ensure the necessary follow-up to this case.

As a reminder, during the three weeks of the military operation “Cast Lead”, 1,500 tons of bombs were dropped from the air on the residential districts in the Gaza Strip and tens of thousands of artillery shells were fired by tanks, destroying thousands of houses, but also hospitals, schools and mosques. The statistics compiled by various NGOs – and taken up by the United Nations – estimate the number of Palestinian victims between 1387 and 1434, including 960 civilians, more than 410 children and about 100 women. The number of injured persons is estimated at 5303, many of whom will remain disabled for the rest of their lives. In addition to the deliberate nature of certain attacks on civilians, Israeli troops have also used weapons whose use or conditions of use are condemned by international law, such as white phosphorus.

The Report of the United Nations Fact-Finding Mission on the Gaza Conflict, commissioned and endorsed by the United Nations, better known as the “Goldstone Report”, stated: To investigate and, where necessary, prosecute those suspected of serious violations in order to ensure respect for human rights and humanitarian law and to prevent the creation of a climate of impunity . States have the duty under international law to investigate allegations of violations. “

During Operation Cast Lead, the statements of some political representatives or spokespeople of the army are distrubing and overwhelming. In this regard, the Goldstone Report states: The Mission also noted with concern the public statements made by representatives of Israel, including senior military officials, that attacks on the civilian population and the destruction of civilian property are legitimate means to achieve the military and political objectives of Israel. The Mission considers that such remarks, in addition to undermining the whole regime of international law, are incompatible with the spirit of the Charter of the United Nations and therefore deserve to be formally denounced.

Tzipi Livni, former Minister of Foreign Affairs, is under this title responsible for the decisions taken during the “Operation Cast Lead” at the same level of responsiblity as Ehud Olmert and Ehud Barak, declared “We will have no pity”. This expression, used in such a context, constitutes, by itself, a war crime, in accordance with Article 136quater, § 1, 28 ° of the Belgian Penal Code.

Tzipi Livni also declared, on 19 January 2009, in an interview on Channel 10 News: “Israel demonstrated real hooliganism in the course of the recent operation, which I demanded”.

The disproportionate use of force is therefore undoubtedly a doctrine planned and endorsed by the Israel Defense Forces. The responsibility of the alleged perpetrators identified in the complaint must be scrutinized in view of this admission.

It is precisely during her visit to the European Parliament that Mrs Tzipi LIVNI will be arrested by the Federal Judicial Police on Monday January 23rd 2017.