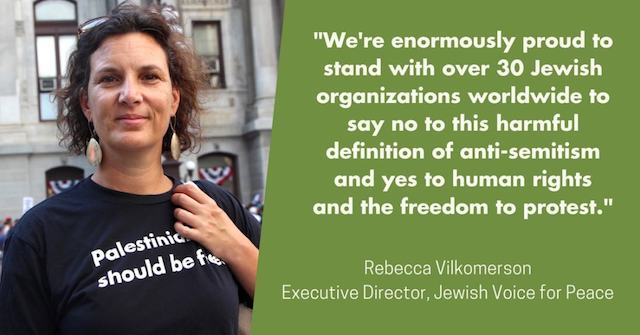 On July 17th, a worldwide coalition of 40 Jewish groups from 15 countries published a letter calling on governments to refrain from adopting the International Holocaust Alliance’s (IHRA) Working Definition of Antisemitism because it “is worded in such a way as to be easily adopted or considered by western governments to intentionally equate the legitimate criticism of Israel and advocacy for Palestinian rights with antisemitism, as a means to suppress the former.”

The IHRA document is composed of a brief, 40-word definition of antisemitism and a list of examples of what may constitute antisemitism. Some of these examples suggest that criticism of the State of Israel for policies that violate fundamental rights of the Palestinian people, including the illegal settlement policy, would be antisemitic. The document, thus, poses a risk to the freedom of expression by conflating legitimate critique of Israeli policies with antisemitism. Already since being adopted by the UK government in December 2016, these guidelines have already been used to target organisations campaigning for Palestinian rights.

Noteworthy is the fact that the IHRA’s Permanent Office in Berlin has meanwhile confirmed that the IHRA Plenary meeting in Bucharest in 2016 had adopted only the brief definition which is featured in a box in the IHRA press release announcing and presenting the IHRA Working Definition, and which states that,

“Antisemitism is a certain perception of Jews, which may be expressed as hatred toward Jews. Rhetorical and physical manifestations of antisemitism are directed toward Jewish or non-Jewish individuals and/or their property, toward Jewish community institutions and religious facilities.”

The IHRA’s Permanent Office also confirmed that the list of examples in the remainder of the document “may serve as illustrations to guide the IHRA in its work and to illustrate how antisemitism could manifest itself.”

Nevertheless, the entire IHRA press release of 2016, with the illustrative examples, has been circulated and promoted, and adopted by European governments, authorities and public institutions, as if it were the official IHRA Working Definition of Antisemitism.

Moreover, as documented by Free Speech on Israel in the U.K., the IHRA definition is being used in practice in this manner to undermine the freedom of expression of European citizens. Kenneth Stern, the author of the definition, has himself raised similar concerns in the United States. He has repeatedly emphasized that the definition was meant for monitoring and data collection about antisemitism only. He strongly opposes the use of the definition for domestic control of free speech and has broken with the American Jewish Congress over this matter. His testimony in a 2017 hearing before the US Congress can be found here.

Also noteworthy is the fact that the EU’s Fundamental Rights Agency (FRA) determined already in 2013 that this document, which was promoted back then as “EUMC Working Definition of Antisemitism”, was not a valid definition, and removed it from FRA’s website.

To find out more read our briefing here.