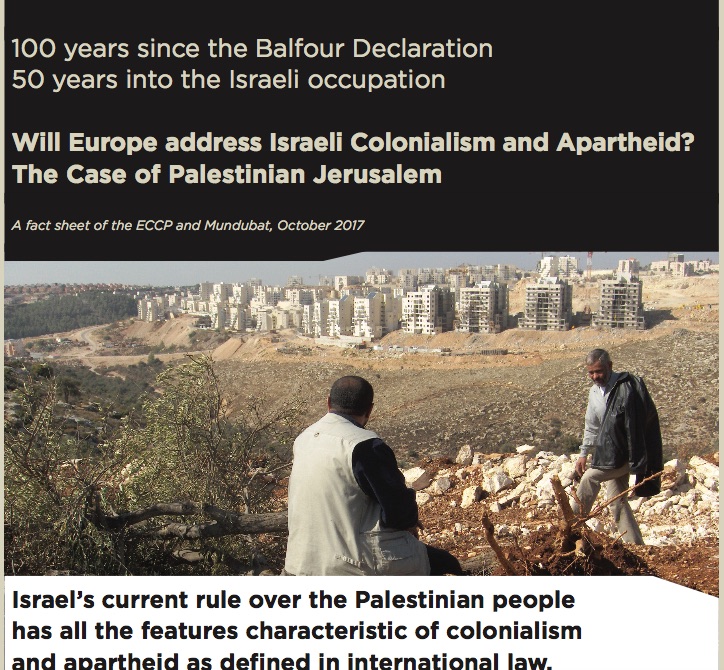 100 years since the Balfour Declaration

50 years into the Israeli occupation

Israel’s current rule over the Palestinian people has all the features characteristic of colonialism and apartheid as defined in international law.

Colonialism: a system of foreign domination and exploitation that deprives a people of the right to self-determination and other fundamental human rights, for example through measures that violate the territorial integrity of the country, sovereignty over natural resources and the ability for self-governance (Based on: Declaration on the Granting of Independence to Colonial Countries and Peoples (UN General Assembly Resolution 1514 of 1960).

Apartheid: inhumane acts of racial discrimination – such as persecution and forcible transfer – which are committed in the context of an institutionalized regime of racial domination and oppression, and with the intention of maintaining that regime (Based on: Convention on the Suppression and Punishment of the Crime of Apartheid, Rome Statute of the ICC).

Since 1948, Israel has legislated the practice of colonialism and racial discrimination into laws. These Israeli laws are an institutionalized regime of racial domination and oppression of Palestinians (read more about these laws here)

Recommendations to the EU, Member States and their Delegations and Missions in East Jerusalem, Ramallah and Tel Aviv: