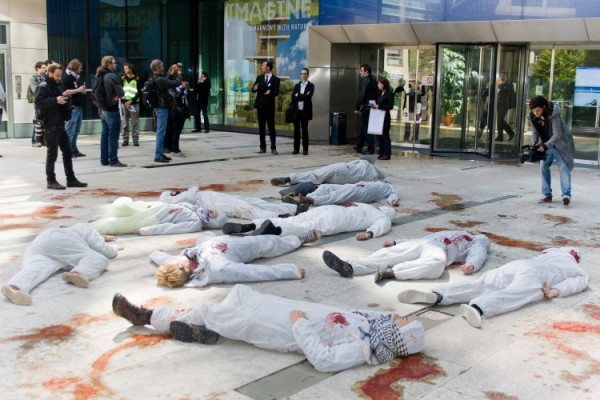 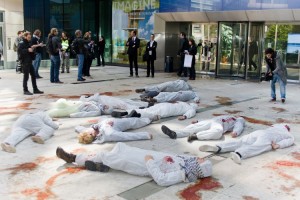 On the 15th of May we remember Nakhba day. In 1948 the state of Israel was born and 750 000 Palestinians were made refugee. On this symbolic day 30 activists of the Belgian peace organizations ‘Vrede vzw’, ‘Vredesactie’ and the solidarity movement ‘Intal’ organised an action at DG Research and Innovation in Brussels to demand an end of European funding of the Israeli military industry through the research program FP-7.

According to Ludo De Brabander, spokesperson for the three organisations: “Both Elbit Systems and Israeli Aerospace Industries (IAI), two Israeli weapon manufacturers, provide equipment for the Israeli wall that has been declared illegal by International Law. Both are important market leaders of drones that are used for militairy operations in the Palestinian Territories that are illegaly occupied. These same companies receive European funds by particiapting in several research programs under FP7 worth 235,8 million euro.”

Two activists clothed as businessmen from the Israeli arms industry entered the building of DG Research and Innovation (EU Commission) to ask for more funding of common research programs under the new Horizon 2020 program. Acting in front of security officers they said: “We represent the Israeli arms manufacturing Industry. We’re here to ensure that the very generous research funding that our members currently receive from the European Commission will continue under the coming Horizon 2020 program.” In a cynical manner both actvist/businessmen pointed to widespread Israeli human rights violations: “you can rest assure that previous money committed under the Framework Program 7 has been spent well,” referring to the funding of drone programs in European Security Research projects with the participation of Israeli arms producers. Israeli Airospace Industries (IAI), the biggest Israeli arms company, has been involved in at least 69 Research and Development programs subsidised by the EU.

Palestinian victims, represented by blood covered activist, showed their suffering as a result of numerous operations by the Israeli military. They unfolded a banner with the message: “Stop EU funding of the Israeli Military industry.”

The actvists demand that in the future Horizon 2020 program, starting in 2014, participation in EU research funding will be subject to ethical criteria to avoid funding of companies and institutions involved in human rights violations.

“A comprehensive military embargo on Israel is long overdue. It forms a crucial step towards ending Israel’s unlawful and criminal use of force against the Palestinian people and other peoples and states in the region, and it constitutes an effective, non-violent measure to pressure Israel to comply with its obligations under international law,” reads the BNC’s call. 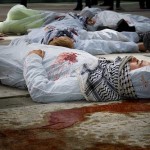 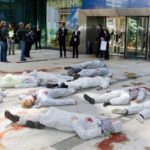 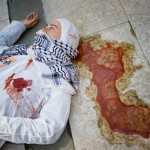 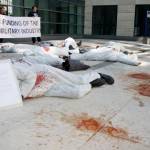 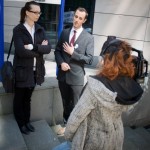 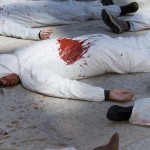 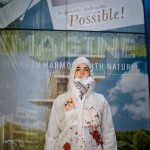