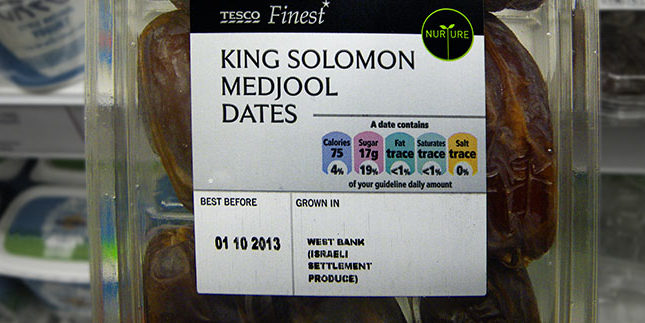 States are shirking their obligations by allowing goods from occupied territories.

A European Citizens’ Initiative calls for a ban on trade in goods from illegal settlements, but the EU Commission declared not being competent. The European Court of Justice sees things differently and played the ball back to the Commission. Historian Peter Leuenberger puts things in order and takes a look at the situation in Switzerland.

The citizens’ initiative wants to stop the trade in illegally built settlements in occupied territories. This measure would particularly affect trade with settlements in the Israeli occupied Palestinian West Bank and the Syrian Golan Heights, but also illegal settlements in the Moroccan occupied Western Sahara as well as other territories that are militarily occupied and economically exploited by the occupying power. But the EU Commission refused to register the initiative in September 2019. The reason given was that it was not competent, because such a step would be tantamount to sanctions. It could only be decided jointly by all member states in the European Council. The executive in Brussels does not have the power to do so.

Ireland’s parliament already tried to pass its own law banning trade in the settlements. However, the European Commission confirmed on this occasion that it alone was responsible for the EU’s common trade policy.

Tom Moerenhout, an expert on international economic law who teaches at New York’s Columbia University, set out in a 2012 legal publication the duty of states not to grant market access to the products of illegal settlements. This follows from the obligation not to recognise or support illegal settlements in militarily occupied territories. Trade with settlements helps the occupying powers to maintain and expand their illegal colonies.

The EU recognises in principle that such an obligation exists. In March this year, for example, the EU declared that it would continue to enforce its policy of non-recognition of the illegal annexation of the Crimean peninsula. But while the EU has imposed sanctions on Russia, it does nothing when it comes to Israel, whose annexation of Jerusalem and the Golan it also does not recognise.

What is Switzerland doing?

In Switzerland, too, there have already been efforts to question the trade in illegal settlements of occupied territories. On 17 March 2011, National Councillor Daniel Vischer (Greens) submitted a parliamentary initiative demanding that the import of goods from Israeli settlements in the occupied territories be banned and that the necessary legal basis for the ban be created. On 14 March 2012, the initiative was rejected in the National Council by 109 votes to 45, with 9 abstentions. The Foreign Affairs Committee had recommended that the initiative be rejected.

During the discussion in the plenary session of the National Council, a lengthy debate ensued, in which the spokesperson of the Commission, National Councillor Ursula Haller (BDP), represented the negative position of the majority of the Commission: “The majority of the Commission warned against setting an example here. No matter how you look at it, with this initiative Switzerland would be taking a stand on an explosive conflict. This is not in the interest of our country, it is not necessary, and it is highly problematic.”

On 16 June 2017, National Councillor Marina Carobbio Guscetti (SP) asked the Federal Council whether it would be willing to consider the possibility of banning imports of all goods produced in illegal Israeli settlements. In its reply, the Federal Council stated: “The tariff preferences provided for in the EFTA-Israel Free Trade Agreement or in the bilateral Switzerland-Israel Agricultural Agreement are only granted on importation on application and on presentation of proof of origin in accordance with the regulations. No preferences [exempt from import duty] are granted for goods from Jewish settlements in the Palestinian territories on the basis of proof of origin relating to the agreements with Israel.” The Federal Council went on to explain that there were no sanctions against Israel that Switzerland had to comply with. UN Security Council Resolution 2334 of 2016 was not a binding decision under international law.

The Department of Foreign Affairs DFA restated Switzerland’s position on the Middle East conflict, the issue of occupied territory and illegal settlements in October 2020. It describes the settlements as a violation of international humanitarian law and, as a consequence, advises, among other things, “natural and legal persons against participating in any form of settlement.”

The Federal Council did not comment on the obligations of third countries arising from the Fourth Geneva Convention, namely the requirement of non-recognition and non-support of illegal settlements in occupied territories, the consequence of which is to be understood as the prohibition or cessation of trade. It apparently assumes that by not granting preferential tariffs for settlement goods, it already sufficiently fulfils the requirement of non-recognition of the settlements.

According to international law expert Moerenhout, preventing trade with illegally operating producers is not a sanction in the sense of international law, but this measure is a mandatory requirement of international humanitarian law. Moreover, the Geneva Conventions have been incorporated into national law. In this respect, it would not be out of place to have the facts and the legal situation judged by a Swiss court.

How significant is Switzerland’s import from the illegal Israeli settlements?

Switzerland’s foreign trade statistics do not distinguish between exports and imports, whether the flow of goods concerns the territory of Israel in the borders of 1949 or the territories occupied since 1967. However, the Federal Customs Administration provides the figures on the values of the flow of goods as well as the corresponding customs revenues, broken down according to the customs tariff applied. Goods from the internationally recognised territory of Israel are exempt from customs duties under the EFTA agreement or are subject to a reduced tariff under the bilateral agricultural agreement.

The occupied territories are excluded from the EFTA free trade agreement, imports must therefore be cleared at the normal rate. Since the origin of the goods must be specified for tariff determination, it can be indirectly determined how high the proportion of goods from illegal settlements duty-paid at the standard rate is. Re-exported goods originating from non-European countries are also charged at the normal rate. But their share is to be estimated as negligible.

The predominantly food supply in supermarkets with a value share of less than 5% of all imported goods creates a distorted picture, as more than 95% of all goods imported from Israel are industrial products, which are not as visible to the public as less valuable agricultural products.

For both agricultural and industrial products, the share of normally duty-paid goods is 53%. If certain re-exports of non-European origin are deducted from this, the share of goods originating from illegal settlements is probably at least 50% of total imports.

It would also be necessary to examine the composition of imports from the individual categories of goods.

The author’s interest in the subject matter

Peter Leuenberger is a historian and member of the Switzerland-Palestine Society.