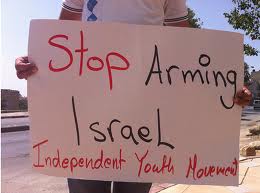 The European Coordination of Committees and Associations for Palestine joins the European Network Against Arms Trade, in its support to the appeal of the Palestinian Boycott, Divestment and Sanctions National Committee (BNC) for an international military embargo of Israel.

The BNC considers that “a comprehensive military embargo on Israel is long overdue. It would form a crucial step towards ending Israel’s unlawful and criminal use of force against the Palestinian people and other peoples and states in the region, and it constitutes an effective, non-violent measure to pressure Israel to comply with its obligations under international law”.

From 2003 to 2008, European Union member states approved licences worth over 1 billion euros in arms sales to Israel. Israel and Israeli military and security companies also enjoy participation in a large range of bilateral and multilateral research and development projects. Israeli military companies participate in more EU funded research projects than those from any other non-EU country.

The EU and its member states are well aware that Israel has been occupying Palestine by military means since 1967, in breach of UN resolution and International Law. The EU and its member states cannot ignore Israeli military history and war crimes committed by Israel, notably in Gaza, as shown, amongst others, by the Goldstone report. Therefore, and in line with the findings of the Russell Tribunal on Palestine, the ECCP considers that States are able to foresee the likelihood of the military aid given to Israel to be used by Israel to oppress the Palestinian people, to maintain its occupation of Palestine and perpetrate grave breaches of International Law.

The ECCP, the largest European coalition of solidarity organisations with Palestine, fully endorses the call from the Palestinian civil society for a military embargo to be imposed on Israel and urges the EU and its member states to end all military relations with Israel. The ECCP also calls upon the EU to exclude all Israeli military companies from EU research programs.