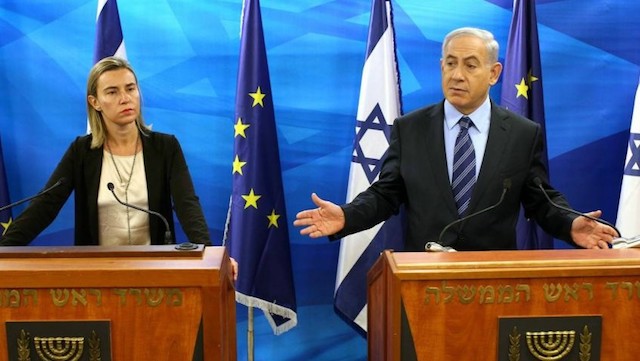 We are writing in advance of the forthcoming Foreign Affairs Council meeting of December 11th .

It is deeply concerning that the Prime Minister of Israel, Benjamin Netanyahu, is scheduled to meet with EU foreign ministers in Brussels on 11 December in what would be the first event of its kind since 1995.

Since 2012, EU-Israel ministerial meetings have been put on hold. Since then, the EU has considered the context unfavourable to restarting the meetings process. The context is no more favourable today – on the contrary, the situation has dramatically worsened.

The state of Israel persists in refusing to address its gross violations of international law and human rights abuses, including

All of the above make clear that Israel continues, with complete impunity, to trample all over the “human rights and democratic principles” that we are told are an “essential element” of the EU-Israel Association Agreement, as stipulated in Article 2.

In addition Israeli government ministers have made threats of physical violence against EU citizens peacefully advocating for Boycott, Divestment and Sanctions (BDS) as a means of compelling Israel to abide by international law. As Amnesty International has noted, “an especially alarming statement came from Israeli Minister of Transport, Intelligence and Atomic Energy Yisrael Katz who called on Israel to engage in ‘targeted civil eliminations’ of BDS leaders with the help of Israeli intelligence”. Increasing numbers of people, many from Europe, are being denied entry in to Palestine and/or Israel by Israeli officials, among them persons who are part of EU founded projects in the occupied Palestinian territories.

In light of the above, hosting and attending a meeting with the Prime Minister of Israel – the personage in whom ultimate responsibility for the above crimes rests – will be seen as an the EU contributing to the official legitimisation and normalisation of the systematic violations of the international law, international humanitarian law, the law of armed conflict and collective human rights, which have become part and parcel of Israeli policy.

Given the serious and deteriorating situation for Palestinians living under Israel rule, we believe it is vital to demonstrate that breaches of international law have consequences – both in diplomatic and political relations and in the area of scientific and economic agreements.

It is time for the EU to show its commitment to human rights and democratic principles by applying restrictive measures on Israel, including by suspending the Association Agreement, in order to demonstrate it is serious in its demands for Israel to comply with international law.

We therefore urge you to refuse to attend this meeting with the Prime Minister of Israel on December 11th, and to seek its outright cancellation by the Foreign Affairs Council.

We kindly request that you inform us as to the position you intend to take concerning the forthcoming meeting.