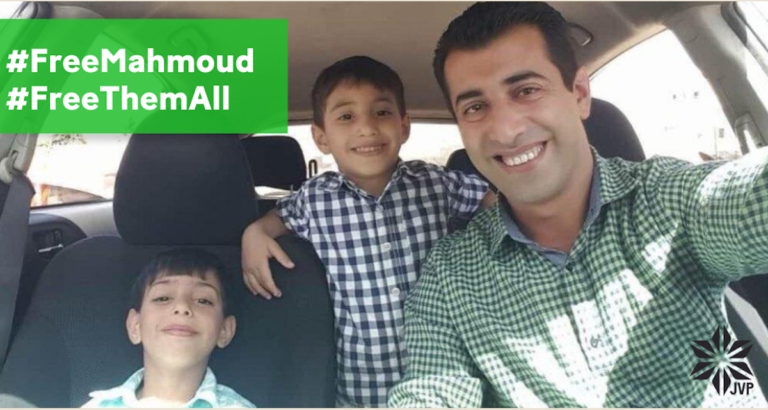 For the attention of :

On July 30th dozens of armed Israeli occupation soldiers arrested Palestinian human rights defender Mahmoud Nawajaa in the dead of night in his home near Ramallah, handcuffed and blindfolded him in front of his family and took him to the prison in Jalameh, a high-security interrogation center inside the state of Israel. Mr. Nawajaa is a respected community leader and General Coordinator of the Palestinian BDS National Committee1.

Since his arrest the Israeli authorities have held Mr. Nawajaa without charge, and have denied him the right to meet his lawyers. Furthermore, holding him in Jalameh prison, which is inside the state of Israel, constitutes an act of unlawful deportation, a grave breach of the Fourth Geneva Convention (Articles 49 and 147), and a war crime under the Rome Statute of the International Criminal Court (Article 8)2.

The arrest of Palestinian activist Mahmoud Nawajaa by Israeli soldiers is another attempt to repress Palestinian human rights defenders and community leaders, and in particular to persecute him as a leader of the non-violent Palestinian-led Boycott, Divestment and Sanctions (BDS) movement that leads global civil resistance to the Apartheid regime that Israel imposes upon the Palestinian people.

However, this arrest is not an isolated incident; recently many Palestinian community leaders and students have been jailed in Israeli prisons and detention centers. Today there are some 4,700 political prisoners held in Israeli jails, including 160 children and 365 people interned without charge or trial under Administrative Detention.

It is important to note that the UN International Convention on the Suppression and Punishment of the Crime of Apartheid defines the “persecution of organizations and persons, by depriving them of fundamental rights and freedoms, because they oppose apartheid” as being one of the inhuman acts committed to maintain an apartheid system. We firmly believe that these arrests, including Mr. Nawajaa’s, form part of such a pattern of persecution.

Mahmoud Nawajaa is a leading Palestinian human rights defender who is highly regarded in Palestine and around the world for his tireless and passionate advocacy for the rights of his people, the indigenous Palestinians, and for

BDS as a means to help realise those rights. Front Line Defenders, one of the world’s most respected human rights advocacy groups who specialise in protection of human rights defenders, has called for his immediate release.

The EU, as expressed in a statement by former EU High Representative for Foreign Affairs, Mrs Federica Mogherini, “stands firm in protecting freedom of expression and freedom of association in line with the Charter of Fundamental Rights of the European Union, (…) including with regard to BDS actions”.

In addition, on 11 June, the Court of Human Rights (ECHR) ruled unanimously that calling for a boycott of Israel is recognised as a civil right.

The EU has also committed to supporting and protecting human rights defenders in non-EU countries in accordance with its Guidelines on Human Rights Defenders.

We, the European Coordination of Committees and Associations for Palestine, a coalition of 40 civil society organisations and NGOs from 20 European countries, join the already numerous calls for the immediate release of Mahmoud Nawajaa.

We ask you, as EU representatives, to specify what kind of actions the EU is going to take to ensure immediate release of Mr. Nawajaa and all Palestinian prisoners being held without charge or trial.

Furthermore, we believe it is the high time for the EU to move beyond criticism of Israel’s human rights abuses and international law violations, and to take concrete actions.

It is time for concrete measures to be implemented by the EU and European governments, including the suspension of the EU-Israel Association Agreement and exclusion from participation in EU Framework Programmes funded by European taxpayers’ money. The EU has tools at its disposal that can change the dangerous dynamics on the ground and enhance the effectiveness of accountability and international responsibility, as detailed in international and European laws.