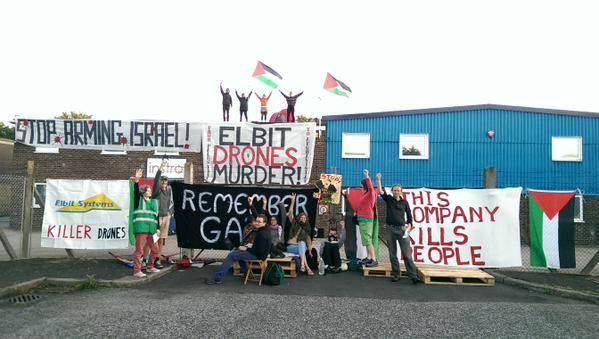 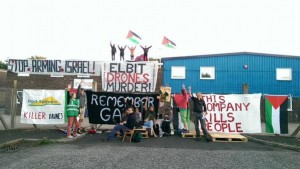 In the UK, more than 150 activists blockaded the UAV Engines Limited factory in Shenstone, Staffordshire. UAV is a subsidiary of Elbit, and has been reported by Amnesty International to have supplied engines for drones that have been used by Israel during attacks on Gaza. Two other Elbit owned arms factories in the UK – Elite KL in Tamworth, Staffordshire and Instro Precision in Broadstairs, Kent – were also shut down by activists who occupied factory rooftops. In Australia, activists closed down an Elbit subsidiary in the southern city of Melbourne.

Elbit company is deeply complicit in Israel’s war crimes in Gaza. A report called “Arming Apartheid,” released last week by the Campaign Against the Arms Trade, War on Want and the Palestine Solidarity Campaign, found that fresh arms exports to Israel worth nearly £4 million ($6.2 million) – including components for drones – were approved by Britain within weeks of the attack.

The action was organised to commemorate the first anniversary of Israel’s 2014 bombardment of Gaza, and also in the week that marks 10 years since the founding of the Palestinian-led BDS campaign