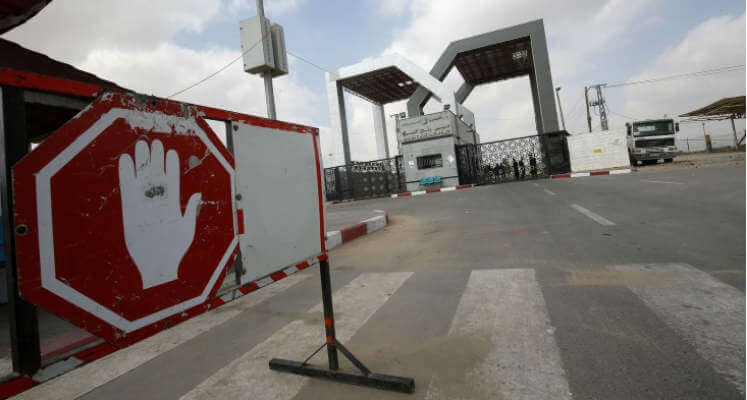 The Gaza Strip, a 365 square kilometer enclave, has been under blockade by Israel since 2007 by land, air and sea. By maintaining total control over the land and all aspects of Palestinian life in Gaza, Israel exercises its most extreme form of occupation there. In this densely populated area about 2 million people have been kept captive, deprived of basic human rights for 15 years.

This blockade impacts all aspects of the population’s daily life and consolidates the territorial and political fragmentation of Palestine, undermining dignified life and self-determination for the people.

Severe restrictions on freedom of movement for people and goods, loss of agricultural land by an arbitrarily declared “buffer zone” and tight restrictions over the fishing zone have dramatically affected economic activities and thrown Gaza’s economy into sharp decline without any means to recover and develop1. Egypt’s restrictions on its border with Gaza have made the blockade even tighter. Most of the people in Gaza have lost their livelihood. Farmers and fishermen are routinely shot at while trying to access their land and sea.

This dire situation is aggravated by periodic military offensives. Four major attacks (2008-2009, 2012, 2014 and 2021) caused a staggering human and material loss (Annex). The most basic human rights, such as the right to life, freedom and safety, are denied to the Gaza population. The human toll and the destruction of livelihood, civilian infrastructure such as power plants, water and sanitation facilities, houses and businesses, affect every aspect of the daily life of the entire population, leading to the collapse of essential services (such as health care and education), of living standards and of the environment. The combined impact of an unprecedentedly lengthy period of blockade, aggravated by cyclical military offensives on the economic, social and environmental aspects of life, has been catastrophic. This disaster has been documented in numerous reports by the UN and various NGOs. As far back as 2015, the UN warned that Gaza would be uninhabitable by 2020 2.

All these consequences were not accidental for the Israeli government, which openly pursues a systematic and deliberate policy to maintain political and territorial fragmentation of Palestine3. It is a part of Israel’s strategy of “demographic engineering” to achieve Jewish dominance in the rest of historic Palestine by virtually eliminating Gaza where the concentration of Palestinians is extremely high. By excluding Gaza from the figures, a Jewish majority (59/41) can be achieved 4.

The May 2021 assault was particularly devastating, since it hit Gaza as it was already struggling under the shadow of the COVID-19 pandemic and previous rounds of destruction. Hospitals were already strained in the middle of a chronic crisis with a shortage of medicines, equipment, resources, and training. Numerous reports emphasize the cumulative effects of prolonged traumas, particularly those inflicted on children who constitute 50% of Gaza’s population. Aid agencies, including the World Bank, issued unprecedented statements calling for systematic policy efforts5, a clear sign that a new political approach is urgently needed.

2.War crimes and crimes against humanity

The blockade and indiscriminate military attacks on Gaza constitute a collective punishment, a war crime under the 1949 Geneva convention and forbidden by international law (1977 Additional Protocol II). It is an integral part of Israeli policy to perpetuate ethnic dominance, defined as a crime of Apartheid and a crime of persecution, which both fall under the category of crimes against humanity and are documented in recent reports by human rights organizations 6, 7.

During the four military operations, hospitals, schools, medical personnel and journalists were also targeted, which constitute war crimes. In addition to these major offensives, unarmed protesters demanding the end of the blockade (from March 2018 to the end of 2019) were met with brutal military repression, again resulting in high mortality and injuries, and again including children, women, elderly people, medical personnel and journalists 8. These war crime allegations are documented in volumes of reports including those by the UN 9. The International Criminal Court (ICC) is currently investigating these numerous allegations10. To this should be added the disregard by Israel of its obligation as the occupying power to guarantee the safety of people under occupation.

Israel tries to justify its policy by citing “security concerns”. However, depriving 2 million civilians of their basic human rights, destroying public infrastructure and private property, shooting protesters, farmers and fishermen have nothing to do with security, but are clearly meant as punitive measures. Israel’s narrative of “self-defence” is not backed by any legal standard. International human rights norms prohibit the use of lethal force except in situations when it is necessary to prevent an imminent threat of death or serious injury11. Indiscriminate aerial attacks on residential areas, intentional targeting of civilians and civilian infrastructure, killing unarmed protesters (even disabled persons) during popular protests, doctors and journalists at work who are clearly marked as such, cannot be justified as “self-defence”.

There is no justification for these war crimes and crimes against humanity committed by Israel against the Palestinian. All of these are clear violations of international law. Nevertheless, total impunity is enjoyed by the government of Israel and by those directly responsible for perpetrating these crimes. This status quo of injustice and the blockade cannot continue after 15 years.

3. An urgent need for a change of perspective from the international community

These alarming conditions, which have finally been acknowledged as impossible to repair under the blockade, need a change in perspective from ad hoc “emergency support” to a sustainable redevelopment. The current vicious circle of destruction by Israel and emergency reconstruction by international donors has proven to be futile, and amounts to a continuing denial of freedom and self-determination of the population.

Although needed, emergency relief alone cannot grant long term viability and reconstruction. Worse, it makes the international donors an unwilling partner in crime by contributing to the perpetuation of this absurd cycle by paying for rebuilding structures only to see them destroyed again. UN institutions, rapporteurs and numerous NGOs have expressed the need for “tackling the root cause”, identified in the blockade and relentless destruction, and have called for “serious political effort”. 12, 13

The intolerable suffering inflicted upon Palestinians held captive in Gaza has reached its breaking point. Urgency is paramount and justifies no further delay in taking political decisions to lift the blockade. The Israeli rhetoric of conveniently blaming “the terrorists” does not wipe out these war crime allegations.

The time has passed for the international community to blindly accept the deceptive excuse of “Security” which lacks any legal basis11. The security of Israel can only be achieved when the security of Palestinians is also guaranteed. This means the end to injustice and repression. 15 years of failure regarding Gaza (or 54 years regarding the Occupied Palestinian Territory) compels the international community to adopt a radical paradigm shift guided by principles of international law. This is the path also suggested by the UN expert group14.

4. Our demands and recommendations to the EU and member states

We demand that the EU and its member states uphold their moral and legal obligations and work towards the immediate and unconditional lifting of the blockade guided by the principles of international law, and therefore:

a. Unrestricted passage of people and goods between Gaza and the West Bank and the rest of the world,

b.Removal of the buffer zone and of restrictions on fishing zones.

6.Annex – Summary of the military attacks on Gaza