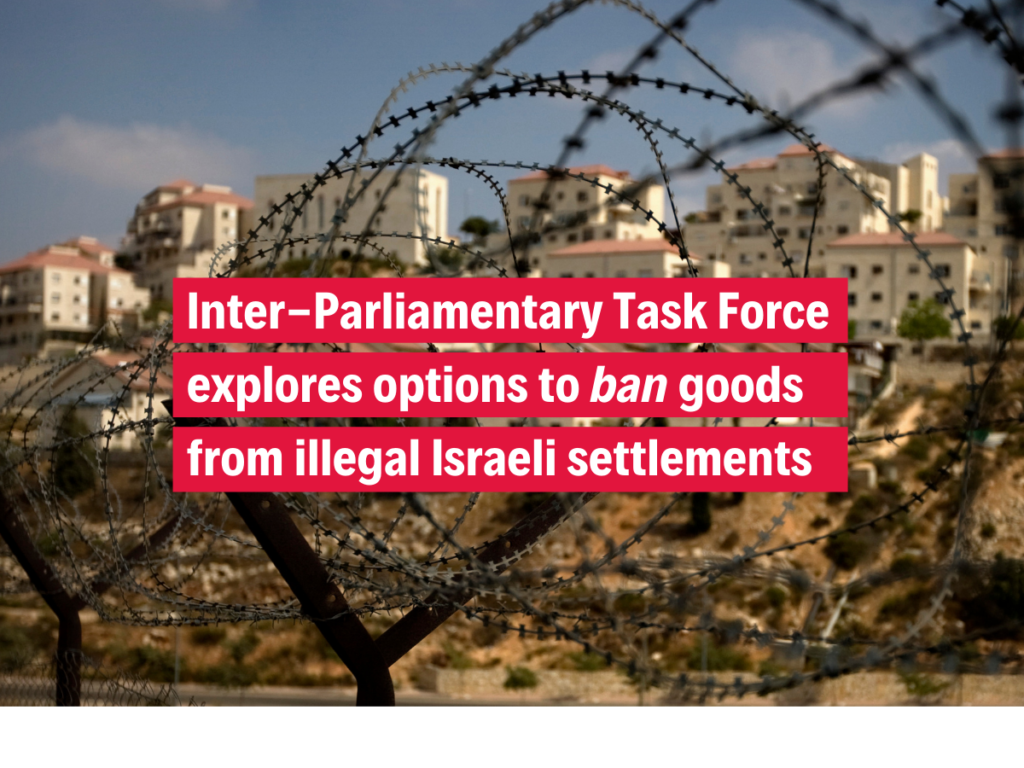 Legislators from Europe and North America met yesterday to discuss various legislative options that lawmakers can pursue to end the import of goods produced in illegal settlements in occupied territory, including by Israeli settlers in the occupied Palestinian territories (oPt).

This was the third meeting of the multi-partisan “Inter-Parliamentary Task Force to Promote Palestinian Human Rights,” a trans-Atlantic initiative which brings together North American and European lawmakers to provide a platform for collaboration, knowledge sharing and joint strategies to promote Palestinian human rights. It is composed of more than 20 legislators from the US, Canada, the UK, Ireland, Spain, Finland, Belgium, Slovenia, Netherlands, and other European countries.

The Task Force heard from several speakers who have been leaders in pushing for legislative initiatives to limit or prohibit trade with illegal settlements. Speakers included Senator Frances Black (Ireland) and MP Veronika Honkasalo (Finland), who have each moved bills or legislative motions to prohibit the import of settlement goods. Lawmakers also heard from MP Steven De Vuyst (Belgium) about the recent announcement of the Belgium government that it would support the annual update of the UN database of companies operating in the occupied territories. Finally, Prof Tom Moerenhout told the Task Force about his role in a European Citizens’ Initiative which is campaigning to push the European Commission to stop trade with illegal settlements.

The international community opposes annexation and considers illegal settlements to be an obstacle to international peace and stability. Nonetheless, most countries have continued to trade with them in violation of UN resolutions. This economic activity allows Israel to profit from annexation, and incentives further illegal expansion of the settlement enterprise.

“Progressive lawmakers around the world have been inspired by Senator Black’s Occupied Territories Bill, which has set a major example for those seeking to end business-as-usual with the settlements,” said Fatin Al Tamimi, Chairperson of the Ireland Palestine Solidarity Campaign, “Now is the time for Ireland to finally adopt this necessary legislation.”

“By coming together to hear directly from legislators and campaigners who are leading the way in countering settlement goods, we hope that we can build further momentum for these initiatives, and inspire other legislators to act to their own contexts” said Aneta Jerska of the European Coordination of Committees and Associations for Palestine.

“Canada has been going exactly in the wrong direction, even extending preferential trade benefits to settlement goods,” said Michael Bueckert of Canadians for Justice and Peace in the Middle East, “We hope that Canadian MPs will be inspired from today’s meeting and will initiate measures to finally ban trade with Israeli settlements.”

Click here for a summary of legislative and regulatory initiatives to counter settlement goods. To find out more about the European Citizens’ Initiative, check out the campaign website.

The Inter-Parliamentary Task Force is supported by civil society groups in Europe and North America. These include Canadians for Justice and Peace in the Middle East (CJPME), the Coalition of Canadian Palestinian Organizations (CCPO), the Ireland Palestine Solidarity Campaign (IPSC), the Palestine Solidarity Campaign (UK), the European Coordination of Committees and Associations for Palestine (ECCP), and Defense for Children International – Palestine (DCIP).