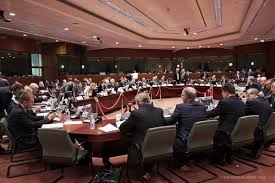 To the attention of  Ministers of Foreign Affairs,

It has come to our attention that the subject of the guidelines which the European Commission published on 19 July last concerning cooperation with Israeli entities in the occupied Palestinian territories may be discussed during the informal meeting of the EU Foreign Affairs Council on September 6th.

The publication caused strenuous objections on the part of the Israeli government, which is now conditioning the signing of an agreement on scientific cooperation and other future agreements with the EU on a change in the wording of the Guidelines concerning settlements to appear in the agreement, and on the renouncement to the full implementation of the conclusions of the Council of Foreign Affairs of 10 December 2012, stating that .

“The European Union expresses its commitment to ensure that – in line with international law – all agreements between the State of Israel and the European Union must unequivocally and explicitly indicate their inapplicability to the territories occupied by Israel in 1967, namely the Golan Heights, the West Bank including East Jerusalem, and the Gaza Strip.”

One of the subjects on the agenda of the Foreign Ministers’ informal meeting will probably be the answer that the EU should make to this Israeli request.

We wish to make it clear why the EU’s response should not be favourable.

First, the Guidelines and the conclusions of the Council of Foreign Affairs are in full conformity with international law, which the EU is bound to respect in accordance with Articles 3(5) and 21(1) of the EU Treaty. Israel’s occupation ofPalestineand the Israeli government’s policy of establishing settlements in occupiedPalestinehave been condemned on numerous occasions by the UN Security Council and the International Court of Justice as well as by the quasi unanimity of the international community. Allowing Israeli entities established in the settlements or having activities there to benefit from financial assistance provided by the EU would amount to recognizing the legality ofIsrael’s settlement policy and rendering aid and assistance to its maintenance and pursuance.

Second, Israel has already concluded agreements with other countries that explicitly acknowledge that they do not apply to the occupied territories. Thus in letters exchanged on the occasion of the agreement of 27 September 1972 with theUSAto establish the US-Israel Binational Foundation, Israel expressly acknowledged that projects sponsored by the Foundation could not be conducted in these territories or relate to subjects primarily pertinent to such areas. Similarly the eligibility policy of the German-Israeli Foundation (GIF), established in 1986 by an agreement between the science ministries of both governments, specifies that the GIF can support only projects conducted within the geographic areas under the jurisdiction of Israel prior to 5 June 1967. In view of these precedents, the present Israeli government’s refusal to acknowledge the same limitation in its agreements with the EU is  incomprehensible.

Third, contrary to the Israeli government’s objection, the Guidelines do not in any way prejudge the issue of the negotiations with the Palestinians. As stated by EU High Representative Catherine Ashton on 19 July 2013, it has been the EU’s long held position that it will only recognize changes to the pre-1967 borders that are agreed by all the parties to the Middle East Peace Process (MEPP). On 10 December 2013 the Council expressed the EU’s commitment to ensure that all future agreements with Israel must unequivocally and explicitly indicate their inapplicability to the occupied Palestine territory. The Guidelines do nothing more than confirm these statements. If the EU were to defer to Israel’s request, this would not only represent a EU-turn in its stated policy – thereby putting in question the EU’s credibility – but would also jeopardize the MEPP.

Fourth, the Guidelines are limited to the strict minimum required to attain their objective :

–  they do not apply to public authorities at national level ;

–  they do not apply to natural persons ;

Thus the frequently-heard criticism that they constitute an excessive and disproportionate sanction againstIsraelis without any merit.

Finally, what is at stake is that the territories occupied by Israel since June 1967 are not part of Israel, and all settlements are illegal. Under international law, the UE has the obligation to take this fact into account. Excluding certain Israeli entities from EU funding simply fulfils that obligation. There is no reason why the EU should make funds available to Israeli entities if these funds are to be used in a manner putting in danger the EU’s policy of advancing the Middle-East Peace Process.

Any step backward would be a complete wreckage of EU credibility, and the renouncement to push the international law as the basis to any peace process.

For all these reasons, we urge the participants in the forthcoming meeting to uphold the Guidelines and the conclusions of the Council of Foreign Affairs of December 2012, and to insist that all future agreements with Israel should contain provisions accurately reflecting their content