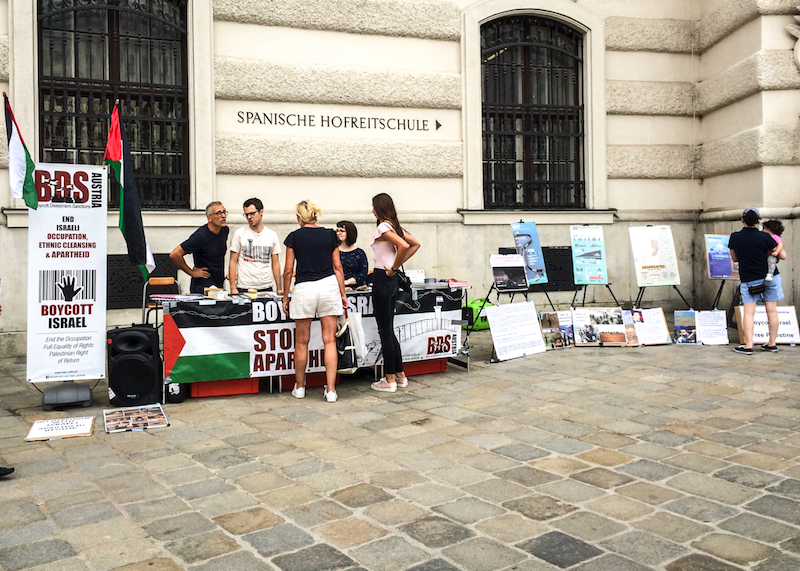 “No EU Cooperation with the Israeli Apartheid state!”

The European Union likes to present itself as the guardian of democracy and human rights.  Undoubtedly, many of the participating ministers believe that they personally and their countries are among the “good ones.”  But the facts are that EU member states apply different standards when on the one hand they consider security issues and on the other human rights.  Under the cover of “research” the EU actually participates very actively in the repression, surveillance, and exploitation of the Palestinian population, which continues to resist in spite of the most modern weapons and surveillance technologies.  The war against the Palestinian people is an engine for Israeli innovation.  Israeli firms, who employ formerly high-ranking police and military officers, play a leading role in the global market for “border security,” “counter-terrorism,” or in the “War on Terror.”  Although many countries sell arms, it seems that Israel’s war-on-people-proven technologies are particular “hits” on the arms markets.  Israeli defense and security firms advertise that their lethal goods are tested “live” – directly on people.

In part, this is made possible, by research cooperation programs with other countries, such as the EU Program for Research and Development (Horizon 2020) in which Israel participates due to its Association Agreement with the EU.  At this point, 288 Israeli firms participate in 881 projects.[1]  Altogether Israeli enterprises and universities received EU subsidies that amounted to more than 546 million Euros.  Although the guidelines of Horizon 2020 forbid military research, many Israeli defense and security companies participate in the program:

Elbit Systems – whose Hermes Drones[2] killed and maimed many civilians in the most recent war on Gaza[3] – received subsidies amounting to one million Euros.

Israel Aerospace Industries – another drone manufacturer, and also a leader in the construction and maintenance of the Apartheid wall that violates international law – received and will continue to receive subsidies of more than 2,5 million Euros.[4]

Israeli universities also have a long and questionable tradition of participating in military research and development:  Technion,  the Israeli “Institute of Technology” received an incredible sum – more than 57,3 million Euros[5] – and the trend is up.  Technion, for example, develops unmanned military vehicles, the preferred use of which is the destruction of Palestinian houses.[6]

In the same time span more than 1000 research projects of the Hebrew University were subsidized with a total of 18,8 million Euros.[7]   Hebrew University is not a purely civil university.  It engages in non-military research, but also operates a university-level school as well as exercise and training facilities for the Israeli military.  Through this involvement Hebrew University is complicit in various violations of human rights, as for example in Gaza during 2008-2009.

During the preceding cycle of subsidies, FP7, which was the precursor of Horizon 2020, Israeli firms received subsidies totaling 840 million Euros.[8]  In many cases, these subsidies were used to maintain the criminal system of occupation, the siege of Gaza, and Apartheid.  The European Union and its member states have become accomplices to these crimes, and, as citizens of the European Union, we consider it our duty to confront the representatives of our governments with these issues.

We demand that the representatives of the European Union act according to the principles they themselves established.  The Code of Ethics for Project Horizon 2020[9] explicitly states, that research projects within its framework must focus on civilian goals, and that only projects with goals that do not violate the principles of human rights should be subsidized.

In reality, recent developments indicate a totally different direction.  The 5 million Euro Law-Train project, led by Bar-Ilan University in Israel, is focused on the exchange of methods of interrogation; in addition to the Israeli police, participants include the Austrian Firm, Usecon.  The project is intended to develop software that will simulate the effectiveness of various methods of interrogation, and which, after its completion, will serve to train the personnel of police forces, secret services and private security firms.[10]  Such a project is unacceptable, on the basis of moral considerations as well as those of human rights and international law.  After all, among the recipients of this technology is the “Israeli Ministry of Public Security,” which controls the Israeli police and prison services.  And these institutions have been repeatedly criticized for using torture and imprisoning children by internationally recognized human rights organizations such as Amnesty International and Human Rights Watch.[11]

We, as part of European civil society, not only have the moral duty to reject economic and scientific cooperation with Israel.  As citizens of Europe, it is also in our own interest to prevent these inhumane techniques and technologies of surveillance, social exclusion, killing and maiming from being passed on to our own security institutions.  This is already taking place when Israeli drones are used to provide so-called border protection against refugees in the Mediterranean, or in the more-than-questionable cooperation between Europol and Israel’s domestic secret service, Shin-Bet.[12]

No EU-Money to the Israeli Arms Industry

No Import of Apartheid Know How

No cooperation with Israeli apartheid Institutions

Apartheid Science is not Science, its terror