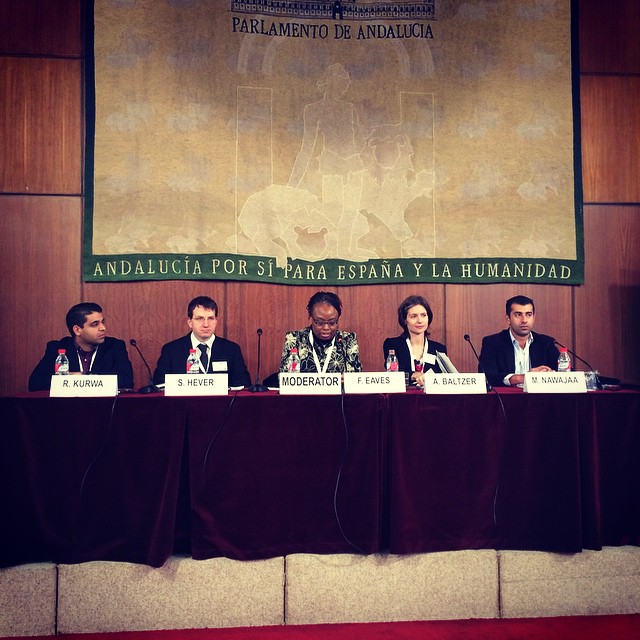 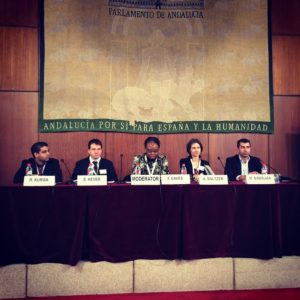 The representatives of ECCP, US Campaign to End Israel’s Occupation, BDS Brasil, PLAN (Palestine Legal Action Network), Russell Tribunal on Palestine, Perdana Global Peace Foundation, Cites Unies France and local governments, as well as other civil society organizations gathered in Seville on December 2nd and 3rd during the International Conference of Governments and Civil Society Organizations in Support of Palestinian Rights, organized by the Andalusian Fund of Municipalities for International Solidarity (FAMSI), the UN Committee on the Exercise of the Inalienable Rights of the Palestinian People (CEIRPP), United Cities and Local Governments (UCLG) and the Junta of Andalusia, with the collaboration of the Parliament of Andalusia. Among other issues conference participants focused on boycott and divestment initiatives taken by local governments, breaking the cycle of Israel’s impunity as well as BDS movement and its economic impact. The BDS panelist included Anna Baltzer from US Campaign to End Israel’s occupation, Mahmoud Nawaja – general coordinator for Palestinian BDS National Committee, Shir Hever from Alternative Information Center and Rahim Kurwa from Students for Justice in Palestine.

Joseph Schechla from Housing and Land Rights Network, Habitat International Coalition presented the oligations of third parties not to render aid or assistance to Israel’s policy of violations of international law and their duty to join the BDS movement.

«BDS gives us power – we are no more waiting for the decision makers to change the policy – we are forcing the change» – said Anna Baltzer from US Campaign to End Israel’s Occupation.

«One of the reasons why the BDS movement is so successful is that we put our struggle for justice in Palestine in the global context. There are many places in USA where apartheid is growing – the same tear gas used against Palestinians is used in USA against people fighting for their rights « she added.

Shir Hever from Alternative Information Center has reminded that without the BDS movement it wouldn’t be possible for the EU to publish their guidelines on Israel’s participation in EU programmes and work on further measures against Israel.

Mahmoud Nawajaa – general coordinator for the Palestinian Boycott, Divestment and Sanctions National Committee (BNC) announced that the Brazilian state of Rio Grande do Sul has cancelled a major collaboration deal with Israeli military company Elbit Systems in the wake of protests over the firm’s role in oppression of Palestinians.

Conference participants has issued an “Olive declaration” endorsed by the representatives of Seville city and local governments, civil society organizations and Andalusian Fund of Municipalities for International Solidarity (FAMSI), the UN Committee on the Exercise of the Inalienable Rights of the Palestinian People (CEIRPP), United Cities and Local Governments (UCLG) and the Junta of Andalusia, calling for :

Read the full text of the declaration here. Declaration was published on the UN website.

Read the Olive Declaration in