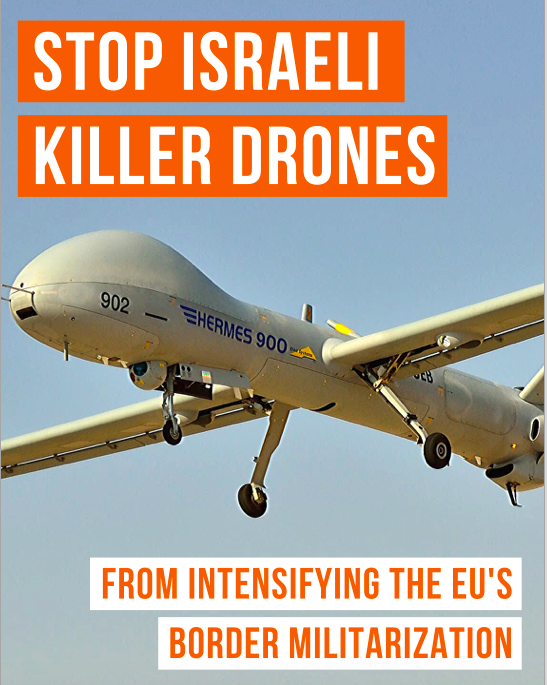 Since the end of February 2020 at Europe’s borders with Turkey, the EU is facing refugees and migrants with increased militarised violence carried out by Greek forces using tear gas on land and live ammunition on sea. European agencies FRONTEX and EMSA are declaring a further escalation of intervention. From the sky, Israel’s killer drones developed during the massacres in Gaza are delivering the necessary information for these attacks on migrants and refugees.

Israel’s military industry has been lobbying for years to get a share of the EU multi-million spending on border militarization. Israel’s Ministry of Defense announced in 2018 that Europe is a “significant target for defense transactions, mainly in terms of ‘border defenses’”. The results are coming in: Frontex and EMSA (European Maritime Safety Agency) have started using Israeli killer drones.

Since 2018, over €63 mln of EU public money has been used to directly finance and fuel Israel’s war economy as Frontex and EMSA further militarize European borders and the Mediterranean with the surveillance and war technology Israel has developed and tested in the brutal assaults on Gaza.

Meanwhile, the number of ‘ghost boats’ – boats with migrants that disappeared without trace in the Mediterranean – has continued to increase in 2019 and 2020.

We have the responsibility and the possibility to stop this now.

ECCP and Stop the Wall release its new briefing “Stop Israeli Killer Drones from Intensifying the EU’s Border Militarization” to denounce the role of Israeli military companies and technologies in these human rights violations.