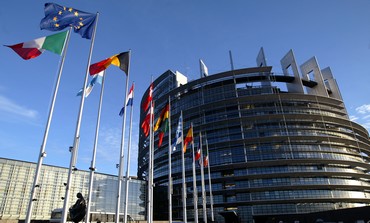 File picture shows European Union member states' flags flying in front of the building of the European Parliament in Strasbourg, April 21, 2004. The European Union won the Nobel Peace Prize on Friday for its long-term role in uniting the continent after World War Two in an award that plays down the euro zone's current debt crisis.REUTERS/Vincent Kessler/File (FRANCE - Tags: POLITICS) 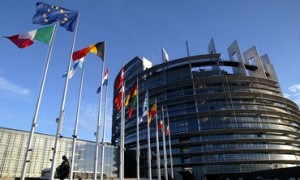 In the latest EU Heads of Mission Report on Jerusalem 2012 the EU consuls urge sanctions against Israeli settlements. Authored by the EU heads of mission in Jerusalem and Ramallah, the report makes recommendations on settlements that are related to financial translations linked to or supporting Israel’s ongoing construction on occupied Palestinian land.

Send a letter to your MEP`s:

Honourable Member of the European Parliament,

In the latest Heads of Mission Report 2012 the EU consuls recommend imposing sanctions on Israeli settlements. The European Union recommended that its 27 member states prevent all financial transactions that support Israel’s settlement activities in the occupied West Bank. In a strongly-worded 15-page report, the EU heads of mission in Jerusalem and Ramallah suggested to its member states that they “prevent, discourage and raise awareness about problematic implications of financial transactions, including foreign direct investments, from within the EU, in support of settlement activities, infrastructure and services.”

Authored by the EU heads of mission in Jerusalemand Ramallah, the report also calls to “ensure that imports of settlement products do not benefit from preferential tariffs” and make sure that all such products are clearly labelled as originating from Israeli-occupied areas.”

It also warns that EU programmes should not be “used to support settlements and settlement-related activity, including funding for research, education or technological cooperation.” And it proposes that member states raise awareness about “the financial and legal risks involved in purchasing property or providing services in settlements.”

Moreover, in a new letter to the foreign ministries of the 27 member states, EU foreign policy chief Catherine Ashton called for the full implementation of existing EU legislation according to which products from West Bank settlements, the Golan Heights and East Jerusalem should not receive the same preferential treatment as products from areas which the EU recognizes as sovereign Israeli territory.

The Members of the European Parliament should be aware that the Lisbon Treaty obliges the EU to ensure consistency, in its external action, between foreign policy and trade policy.

We believe that the continued occupation of the West Bank; the blockade of Gaza; the annexation of East Jerusalem; the establishment and expansion of Israeli settlements in the Occupied State of Palestine, the exploitation of Palestinian natural resources for the benefit of Israeli settlers; the construction of a Wall on Palestinian territory; the illegal detention of Palestinian prisoners, among them children, in Israeli jails; and the systematic discrimination against Palestinian citizens of Israel, are not consistent with the enhancement of EU trade relationswith Israel.

In that context, we respectfully request you to make efforts to: