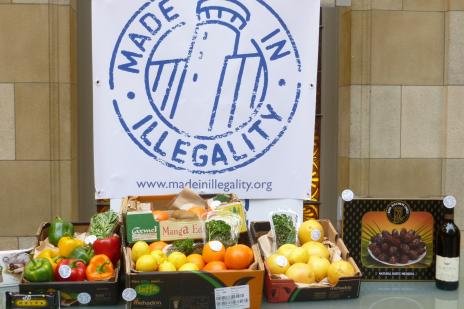 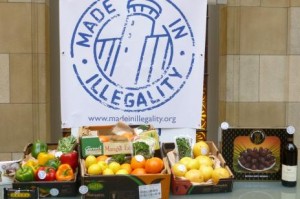 On Thursday – February 27, some 20 Belgian organisations launched a campaign “Made in illegality.” The campaign advocates on the basis of international law that Belgium and the European Union have the obligation to  end all economic relations with the illegal Israeli settlements. The legal approach of the campaign is based on the report prepared by Francois Dubuisson – a professor of International Law at the Université libre de Bruxelles (ULB), in the Center of International Law.

In relation to Israel’s settlement policy, Belgium and EU member states must:

THE ORGANISATIONS THAT RUN THE “MADE IN ILLEGALITY” CAMPAIGN THEREFORE DEMAND THAT THE BELGIAN GOVERNMENT AND THE EU:

1.prohibit the import of settlement products;

2. exclude the settlements from their bilateral agreements and cooperation with Israel;

3. discourage Belgian companies from investing in settlements and from maintaining economic relations with them;

4. exclude companies which are active or located in the settlements from public markets and public procurement procedures;

5. discourage Belgian and European citizens from buying real estate in the settlements;

6. develop guidelines for travelers to ensure that they avoid supporting companies and tourist sites that are located in the settlements.

More informations about the campaign:

Israeli colonization is expanding and taking more and more occupied Palestinian territories.Day after day,it causes the eviction of Palestinian residents, the destruction of their homes, the loss of their farmland and water resources. In addition, it physically destroys any chance of resolving the Israeli-Palestinian conflict and is severely detrimental to the viability of the Palestinian economy.

By allowing the import of produce from these settlements, Belgium and the European Union participate in the support of this policy of colonization and contribute to its prosperity and its expansion. However, legal obligations under international law prohibit aid that helps maintain an illegal situation.

You can read the report by Francois Dubisson here