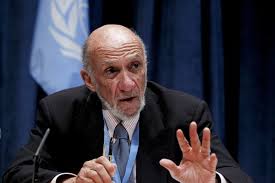 “Through prolonged occupation, with practices and policies which appear to constitute apartheid and segregation, ongoing expansion of settlements, and continual construction of the wall arguably amounting to de facto annexation of parts of the occupied Palestinian territory, the denial by Israel of the right to self-determination of the Palestinian people is evident,”

In East Jerusalem, the “revocation of residency permits” and “forced evictions of Palestinian families,” as well as targeted demolition of Palestinian homes, amounts to a “gradual and bureaucratic process of ethnic cleansing,” Falk writes.

Israel’s policies in the West Bank and Gaza Strip appear to amount to apartheid due to its systematic oppression of the Palestinian people and de facto expropriation of their land, Falk said in his final report to the UN Human Rights Council after serving six years in the independent post.

Falk will present his report next month to the UN Human Rights Council as its special rapporteur on the Palestinian territories, demands that the world court examine whether Israel is guilty of the international crimes of apartheid and ethnic cleansing and urges the UN to investigate corporations that profit from unlawful Israeli activities.

In his report UN special rapporteur recommends that UN member states should consider imposing a ban on imports of produce from Israeli settlements.

You can read a full report here