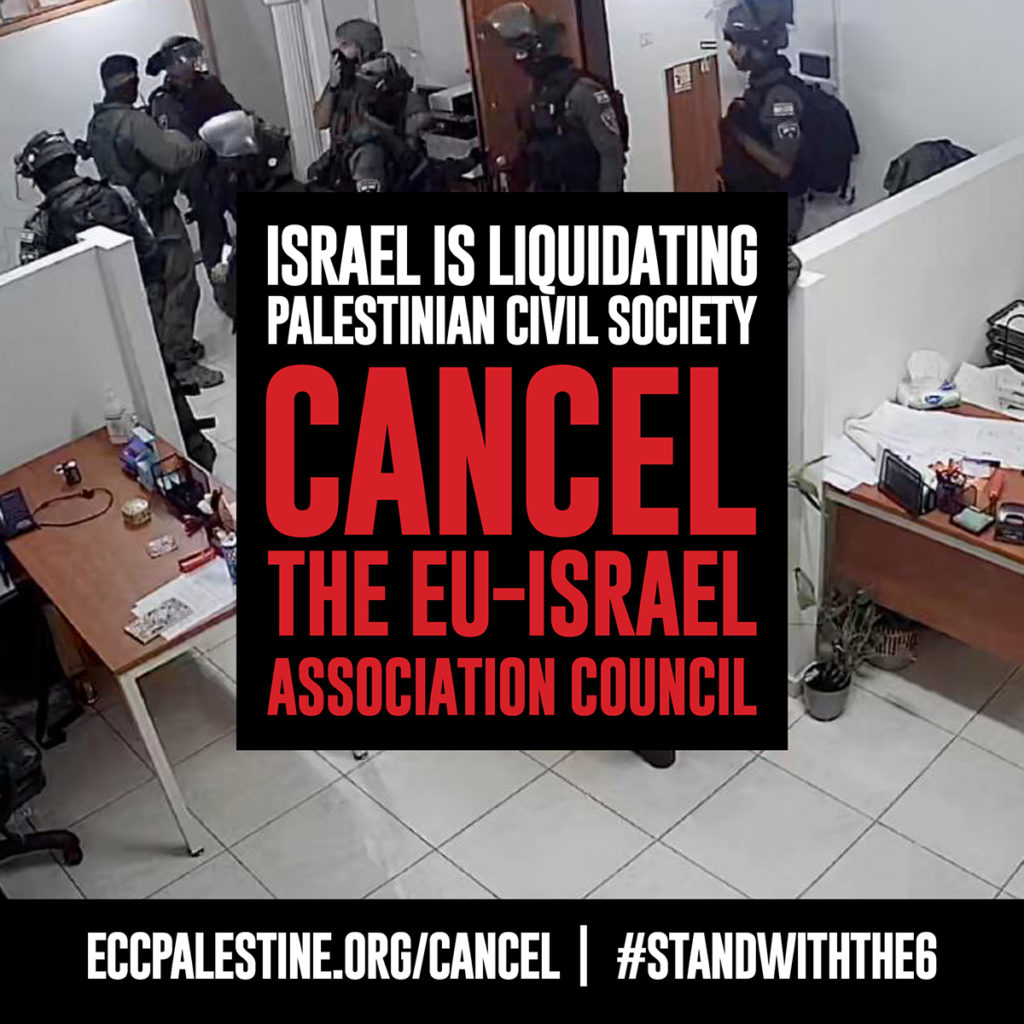 The European Union maintains close relations with Israel. In 2000, the EU-Israel Association Agreement entered into force. This agreement also established an Association Council, in which the European and Israeli Foreign Ministers meet to further develop their bilateral relations.

Due to Israel’s violations of international law and its destructive policies, the Association Council hasn’t been held for 10 years. However, last July, the EU decided to revive the Council. EU High Representative for Foreign Affairs Josep Borrell and the European Foreign Minister plan to convene the Council in early October for a meeting with Yair Lapid, Israel’s current Prime and Foreign Minister.

THIS IS UNACCEPTABLE. The Association Council would be held while Israel is preparing for a dramatic mass eviction and forcible transfer of over one thousand Palestinian civilians in Masafer Yatta (occupied West Bank). In parallel, Israel is advancing the notorious “E1 settlement”, which cuts the West Bank into two parts, effectively destroying any remaining hope for a viable Palestinian state.

Israel did so, after designating these organizations as “terrorist organizations” – without presenting a shred of evidence of any misconduct by the NGOs. Indeed, Israel’s attack on Palestinian civil society is politically-motivated and designed to destroy organizations that seek to hold it accountable with legal and democratic means for its widespread human rights violations. Such behaviour is characteristic of dictatorial regimes.

Israel’s attack on Palestinian civil society represents a direct attack on the EU’s principles and interests. The EU and its Member States are the largest donors of Palestinian civil society organizations, including those targeted by Israel. More than that, the EU-Israel Association Agreement stipulates that both parties’ respect for human rights and democratic principles is an “essential element” of the agreement.

It is crystal-clear that Israel behaves in flagrant contradiction to that provision. In fact, violating and undermining human rights is an essential element of Israel’s behaviour towards the Palestinians.

Convening the EU-Israel Association Council at this stage, would only embolden Israel to further escalate its attack on Palestinian civil society.

In solidarity with and support of Palestinian human rights defenders who are facing existential risks, we must now raise alarm:

Please amplify this call by promoting our banners on social media: Banner 1 and Banner 2.

By doing so, you will add your voice and volume to the dozens of Palestinian and European civil society organizations, as well as to dozens of members of the European Parliament, who are urging the EU and its Member States:

Letter by 47 Members of European Parliament to the EU 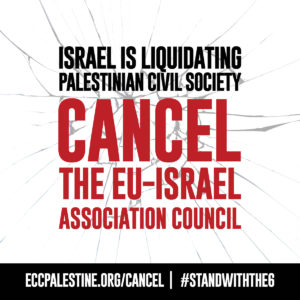