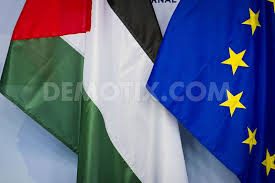 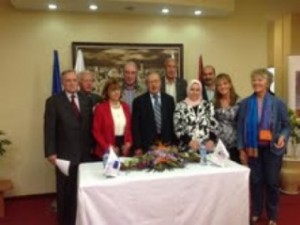 Members of the European Parliament’s Delegation for Relations with the Palestinian Legislative Council have just concluded a three-day visit to the West Bank and East Jerusalem, following the Israeli authorities refusal to allow them enter Gaza.

The Delegation met with Prime Minister Rami Hamdallah, the Minister for Detainees,  Issa Qaraqe and Members of the Palestinian Legislative Council.  The Delegation also travelled the region with representatives from civil society, UN Agencies for refugees and humanitarian aid, UNRWA and OCHA, and witnessed at first hand the impact of Israel’s occupation of the Palestinian territories.

Speaking at the final press conference, the Chair of the Delegation, Emer Costello,  expressed their concern that the plight of Palestinians is deteriorating  rapidly.

“From what we have seen, we believe that Israel is ignoring its duty as an occupying power, in breach of the Oslo Accord of 1993. Settlement construction in the Palestinian territories, settler violence against Palestinians and their property, the forcible displacement of communities, the absence of a fair and transparent planning system and the seizure of the most economically productive lands in the West Bank are preventing the establishment of an independent Palestinian State, alongside Israel.  Moreover, the Israeli occupation is obstructing the development of a sustainable economy in Palestine, making it even further dependent on aid.”

The Delegation also expressed their serious concern at the treatment of the Bedouin Community who are being forcibly removed to pave the way for the massive E1 Settlement, which, if constructed, would render the two state solution impossible.

Members had previously expressed their disappointment at being excluded from Gaza, believing that this contributes to the further isolation of the besieged Gaza Strip.

The Members impressed on Prime Minister, Rami Hamdallah, the necessity for Palestinian unity to achieve a real and lasting solution and an end to the Israeli occupation.  They called for early elections across the Palestinian territories, including West Bank, East Jerusalem and Gaza.

Some members of the Delegation attended last night’s Homecoming Reception in Ramallah for prisoners.While welcoming the release of twenty-six pre-Oslo prisoners, the Delegation expressed grave concern for the 5,000- Palestinians in Israeli prisons.  The European Parliament passed a resolution last March calling for release of political prisoners and seeking a fact-finding mission from the Parliament to assess the situation of the detainees.   The MEPs are pressing for this mission to take place before the end of the year. At the same time as the prisoner release, Israeli authorities announced the building of 1500 new illegal settlement units, which questions the commitment of the Israeli authorities to genuinely engage in the peace negotiations.

The Delegation concluded that the EU has considerable leverage in the region as Israel’s biggest trading partner and the largest funder to the Palestinian Authority.  The strong EU Council conclusions in May 2012 followed by the Guidelines on Settlements published in July 2013 demonstrate that when there is the political will, such leverage can yield reaction and results.  The Delegation is now calling on the Member States to ensure that they continue to exert pressure on Israeli authorities to end the occupation and achieve the Palestinian right to statehood and self-determination.