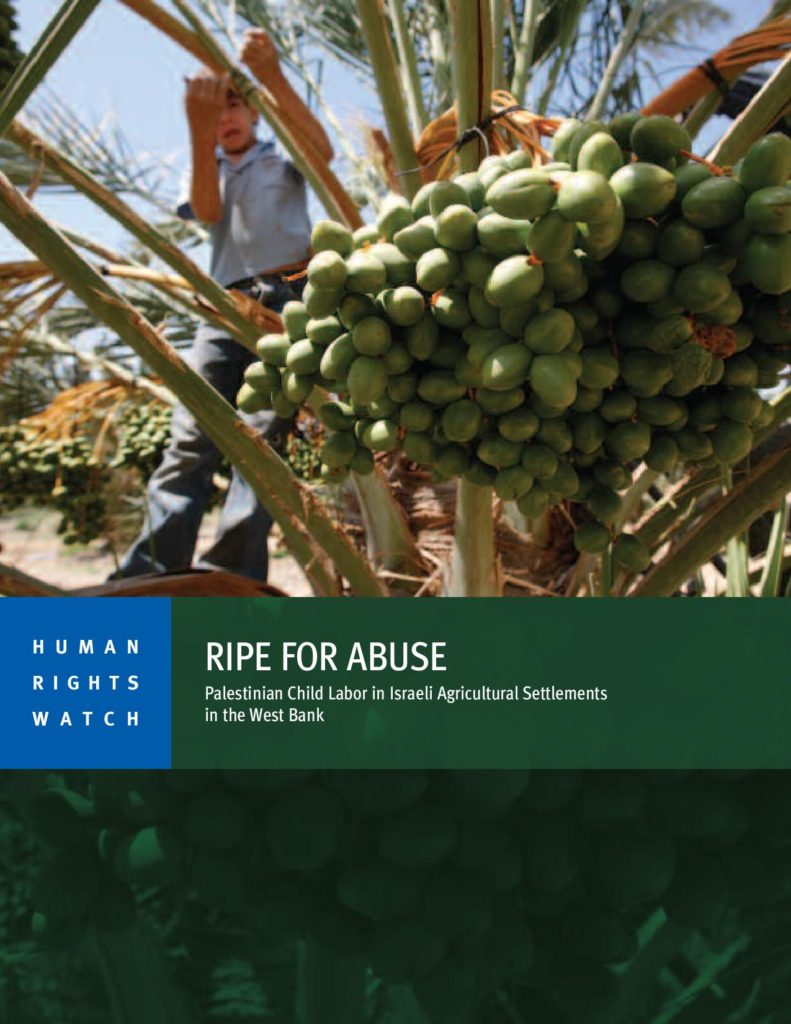 Israeli settlement farms in the West Bank are using Palestinian child labor to grow, harvest, and pack agricultural produce, much of it for export, Human Rights Watch said in a report released today. The farms pay the children low wages and subject them to dangerous working conditions in violation of international standards.

The 74-page report, “Ripe for Abuse: Palestinian Child Labor in Israeli Agricultural Settlements in the West Bank,” documents that children as young as 11 work on some settlement farms, often in high temperatures. The children carry heavy loads, are exposed to hazardous pesticides, and in some cases have to pay themselves for medical treatment for work-related injuries or illness.

Israeli policies that support the transfer of civilians into occupied territory and Israel’s appropriation of land and resources there for settlements violate Israel’s obligations as the occupying power under the Fourth Geneva Convention. These violations are compounded by rights abuses against Palestinians working in the settlements, including children, Human Rights Watch said. Israel should dismantle the settlements and, in the meantime, prohibit settlers from employing children in accordance with Israel’s obligations under international treaties on children’s rights and labor rights.

Israel has allocated 86 percent of the land in the Jordan Valley to settlements, and provides vastly greater access to water from the aquifer beneath the valley to the settlement agricultural industry than to the Palestinians living in the valley. Israeli agricultural settlements export a substantial amount of their produce abroad, including to Europe and the United States

Other countries and businesses should uphold their own responsibilities not to benefit from or contribute to the human rights abuses against the Palestinians in the West Bank by ending business relationships with settlements, including imports of settlement agricultural produce, Human Rights Watch said.

“The settlements are the source of daily abuses, including against children,” Whitson said. “Other countries and businesses should not benefit from or support them.”

You can read the full report here