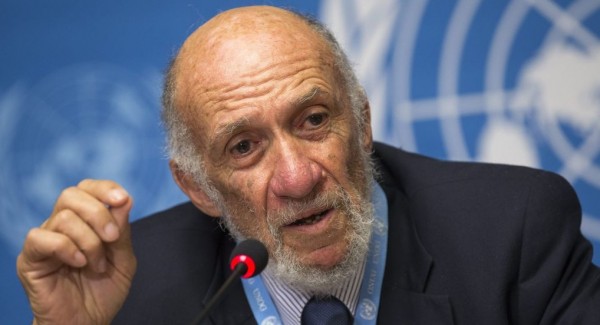 You are a co-author of a recent UN report, the first UN publication that uses the term ‘apartheid’ to describe Israeli policy in Palestine. The report got offline after two days. What happened?

R.F: The report referred to in the question was commissioned by the UN Economic and Social Commission for West Asia (ESCWA), and was devoted to considering whether Israeli policies and practices with respect to the Palestinian people as a whole (and not just to those living under occupation) constitute apartheid as this crime is defined by international law in the 1973 ‘International Convention on the Suppression and Punishment of the Crime of Apartheid.’ This independent academic report, jointly written with Professor Virginia Tilley, a distinguished political scientist and worldwide expert on apartheid, reached the conclusion that Israel had established a structure of domination and racial discrimination based on the fragmentation of the Palestinian people and sustained by ‘inhuman acts’ so as to maintain a Jewish state. Although the report was commissioned by an organ of the UN it contains a disclaimed stating that its findings and conclusions are those of the authors and not necessarily of the UN.

Without considering the evidence or analysis of the report, the diplomatic representatives of Israel and the United States savagely attacking the report as a prime instance of Israel-bashing by the UN, demanding that the UN Secretary General dissociate the Organization from the report. Over the objections of Rima Khalaf, the Director of ESCWA, Antonio Gutiérrez ordered the report removed from the ESCWA website. Rather than comply, Ms. Khalaf resigned, indicating her reasons in a moving letter to the SG. The report was subsequently endorsed by the 18 foreign ministers representing the governmental members of ESCWA. These officials recommended that the conclusions of the report guide future UN efforts with regard to Israel/Palestine. The firestorm of geopolitical objection to the report, although unpleasant for us as authors, did give our findings and analysis much greater attention throughout the world than they would otherwise have received. I am told it is by far the most influential report ever produced by ESCWA.

Did you also encounter this sort of opposition at the time when you were the UN special rapporteur until three years ago?

R.F: Yes, the inflammatory reaction to the apartheid report was fully consistent with frequent smears I received during my six years as Special Rapporteur. I was constantly accused of being an anti-Semite and self-hating Jew merely because I tried to set forth as truthfully as I could to identify and document the Israeli violations of international humanitarian law in the course of its occupation of the West Bank, Jerusalem, and Gaza, which was the scope of my mandate.

You spent 6 years mandated as a UN Special Rapporteur on OPT. From your experience what kind of effective tools the international community has at its disposal to hold Israel accountable for its violations of international law and human rights?

R.F: My experience at the UN as Special Rapporteur convinced me that the Organization, for all of its limitations and frustrations, and there are many, is still a vital site of struggle with respect to Palestinian prospects for a just and sustainable peace. The UN exerts great influence over the struggle to shape world public opinion, and in this role contributes to the understanding and confidence of civil society organizations that are either encouraged or inhibited by the flow of debate within various organs of the UN, especially the Human Rights Council in Geneva and the General Assembly in New York City. One indication of the significance of the UN is the energy devoted to shield Israel from criticism and censure, much less sanctions, by Israel’s diplomats, and especially by U.S. and on many occasions by EU member countries. The current attack on UN funding in response to alleged ‘Israel-bashing’ and its so-called obsession with Israel’s violations of human rights, which Israel and the U.S. insist are less serious than some member states whose abuses receive little or no attention.

At the same time, it would be wrong to exaggerate the UN capability to alter the behavior of Israel or its allies, or in that way to modify the behavior responsible for current levels of Palestinian victimization. In this crucial regard the UN is captive of geopolitics with respect to Israel/Palestine. It can influence the discourse within the UN and in civil society, but it is unable to act directly either to protect Palestinians against abuse of their rights under international law or to do anything that produces adverse effects on Israel in response to their violations of Palestinian rights. In this sense, to achieve a greater effectiveness for the UN would require diminishing the leverage of geopolitical actors, especially the United States, and thereby increasing the financial and political independence of the Organization. Serious moves in this direction would include basing all or much of UN funding on a global tax levied on international air travel, luxury goods, or financial transactions. As well, it would be symbolically and substantively helpful to abolish or limit the use of the veto power by the five permanent members (P-5) of the UN Security Council.

How would you explain change in the approach towards Palestine from countries like India or China that in the past were natural supporters of Palestinian cause?

R.F: Each instance is different, and needs to be separately interpreted to identify its distinctive features. Beyond this there is a widespread sense among many governments that the Palestinian struggle has become a lost cause, and that it is hence appropriate for foreign governments to serve their own national interests by accepting this reality. Additional to this, Israel has been very successful in promoting itself as a niche arms supplier and as possessed of special knowledge and experience in conducting counterinsurgency operations in urban settings. For that reason it has developed a lucrative business, with political side benefits, of providing training to foreign military personnel and police departments. Israel is a useful partner for certain forms of trade, and does not itself intervene outside the Middle East. Finally, with the rise of economic globalization there has been a declining willingness by countries such as China and India in promoting anti-colonial liberation movements.

2017 marks 12 years since the Boycott, Divestment and Sanctions (BDS) movement was born. All over the world we can see a growing support for this campaign from universities, churches, local councils etc. At the same time Israeli government intensifies its efforts against those involved in this peaceful struggle. From your perspective what effect did the BDS movement have in the past 12 years and how do you see its future?

R.F: I think the growth of BDS and the intensification of the backlash against it are part of the same phenomenon. That is, as BDS grows it mounts increasing pressure, Israel feels threats and worries about the future, and tries to break the will of BDS by imposing as heavy costs and punishments as possible upon those who are militant in their engagement with BDS. Israel degames BDS supporters by calling them examples of a ‘new anti-Semitism’ that should be suppressed to avoid a repetition of the Nazi crimes of the 1930s. Israel is losing ‘the legitimacy war’ being waged by the Palestinian national movement to gain control over global public opinion. Although armed struggle and diplomacy have failed, Palestinians now rest increasingly their hopes on achieving victory in the legitimacy war that is above all dependent on the mobilization of civil society throughout the world. This kind of victory happened unexpectedly in South Africa, resulting in dismantling the racist apartheid regime. The recall of the South African outcome generates hope among Palestinians and anxiety among Israelis and their Zionist backers around the world.

What is your advice for European BDS groups to strengthen their influence on their governments and media?

R.F: Spreading the understanding that with diplomacy irrelevant and UN action marginal, the best strategy for those supporting human rights, international law, and global justice is to lend maximum support to BDS efforts. It is also important to clarify BDS as a movement that accepts leadership and guidance from authentic representatives of the Palestinian peoples and is committed to working out a sustainable peace for both peoples. It is not trying to drive Jews from Palestine or to destroy Israel as a state, but it is demanding that the Israeli state abandon policies and practices that have produced an apartheid reality for the Palestinian people as a whole.