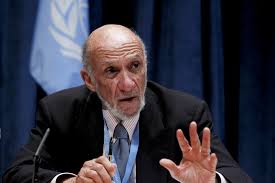 The outgoing United Nations Special Rapporteur on the situation of human rights in the Palestinian territories, Richard Falk, urged more businesses and civil society “to join the growing global solidarity movement to resist the prolonged Israeli occupation and creeping annexation of Palestine.”

His appeal comes in the wake of the collapsed Israeli-Palestinian peace talks brokered by the United States over the past nine months.

“Both Israelis and Palestinians deserve a just resolution to this conflict with human rights at its core, but the latest round of talks has again created false hopes and fuelled feelings of frustration,” the expert said.

“The best prospect for realizing Palestinian self-determination now is by way of pressures exerted through grassroots mobilization,” stressed Falk.

“We must strengthen the global solidarity movement, which includes the boycott, divestment, and sanctions (BDS) initiative in relation to businesses that profit from the settlements, as well as other forms of non-violent resistance,” he said.

“Third party Member States of the United Nations also have an important responsibility to ensure they are not complicit in human rights violations in Occupied Palestine,” he underscored.

“Regretfully, over the past nine months, Israel accelerated settlement construction, demolished Palestinian homes in the West Bank and broke its agreement to release the final batch of 30 pre-Oslo Palestinian prisoners detained by Israel for over 20 years,” said the UN expert.

“The facts on the ground speak for themselves,” he said.

According to figures released by the NGO Peace Now, Israel promoted plans and tenders of no less than 13,851 new housing units during the nine months set aside for reaching an agreement – an average of 50 housing units per day.

Among the latest developments has been the establishment of a new settlement – the first since the 1980s – at al-Rajabi House in the heart of the old city of Hebron and the appropriation by Israel of 243 acres of Palestinian land in the Gush Etzion settlement bloc just south of Jerusalem as ‘state land’.

On the recent intra-Palestinian agreement on unity, Falk said: “Palestinian unity that brings together the people of the occupied West Bank and the Gaza Strip under one Government should be welcomed by the international community as a step in the direction of meaningful right to self-determination.”

He noted that President Abbas had given the UN assurances that the unity pact would include recognition of Israel, non-violence, and adherence to previous agreements.

On 2 April, Palestine announced it will adopt a number of key international treaties, including seven of the nine core human rights treaties, and one of the protocols without any reservations.

“Israel claims that Palestinian moves on the UN track derailed the peace talks, but the State of Palestine’s intention to be formally bound by these treaties under international law is commendable,” said Falk.

The Special Rapporteur also reiterated his calls for the UN General Assembly to seek an Advisory Opinion from the International Court of Justice regarding the prolonged occupation of Palestine.