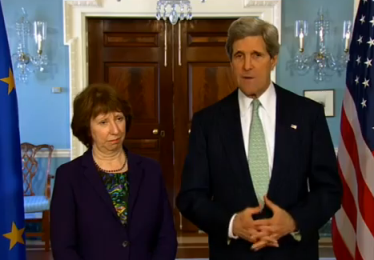 A statement released by 40 Palestinian civil society organisations has called on the European Union to resist US pressure to abandon new rules excluding Israeli settlements from EU programs.

The statement also calls on the EU to take further action to end its complicity with Israeli apartheid, including by suspending the EU-Israel Association Agreement.

– EU must resist US pressure and meet obligations under international law
– EU should take further steps to end complicity with Israeli apartheid, colonialism and occupation
– The Dutch government has demonstrated states can prevent business involvement in illegal Israeli projects in the occupied Palestinian territory

Palestinian civil society strongly condemns US Secretary of State John Kerry for urging the European Union to drop new guidelines that are aimed at ensuring the EU does not recognise Israeli sovereignty over Palestinian territories occupied since 1967 and calls for their full implementation.

The new EU guidelines announced in July prevent EU funding being awarded to Israeli projects and entities in the Occupied Palestinian Territory, including East Jerusalem, and exclude any Israeli entity with activity in the OPT from participating in EU financial instruments such as loans.

Entering into force in 2014, the new guidelines should ensure that companies and institutions based in illegal Israeli settlements such as Ahava cannot receive EU research grants and that Israeli entities with operations in settlements such as state water company Mekorot and Bank Hapoalim cannot be awarded loans by the European Investment Bank. These guidelines are a welcome step towards the EU ending its most damaging forms of complicity with Israeli apartheid, colonialism and occupation against the Palestinian people.

On Thursday, the EU and Israel will start negotiations over Israel’s participation in Horizon 2020, the lucrative EU research-funding program that will run from 2014 until 2020. According to Israeli media reports, Israel expects to receive €300m more in funding than it will contribute to the scheme. At the very least, the EU must ensure that Israel’s participation is in compliance with the new EU guidelines announced in July. Failure to do so would amount to an abandonment of the rule of law in EU internal and international relations, including efforts for a just peace between Israel and the Palestinian people.

Even when the new guidelines are fully implemented, the EU will still award Israel crucial economic and political support despite its repeated and on-going violations of international law and human rights. As noted by former EU foreign policy chief Javier Solana, the EU-Israel Association Agreement allows Israel to participate in so many EU programs that it can be considered a “member of the European Union without being a member of the institution”.

This unequivocal support gives license to Israel’s serious breaches of international law that violate the rights of the Palestinian people, foremost our right to self-determination. It is also in clear violation of Article 2 of the EU-Israel Association Agreement, which states that  EU relations with Israel should be conditioned on mutual respect for “human rights and democratic principles”.

In light of the persistent Israeli refusal to respect Palestinian human rights and international law, Palestinian civil society continues to call for the suspension of the EU-Israel Association Agreement and urges the EU to refrain from entering into new agreements or any kind of upgrade in relations between the European Union and Israel.

In addition to the suspension of the EU-Israel Association Agreement, the EU and its member states should take additional measures to meet their obligations not to recognize or assist Israeli violations of international law and to end existing complicity by:

– Taking steps to prohibit private economic relations with Israeli entities located or operating in the OPT, including East Jerusalem.  Such economic relations contribute to the continued existence and expansion of the illegal Israeli settlements, Israeli annexation of occupied Palestinian territory and related human rights abuses. For example, many Israeli settlements are only economically viable because the companies operating within them are able to exploit Palestinian natural resources and export agricultural produce to European retailers.  States that allow such trade to continue violate their own obligations under international law.

As a first stage, the EU and its member states should  issue guidelines  advising companies not to maintain economic relationships with Israeli entities that are located or operating in the OPT. One example of the positive role that governments can play in this regard is the advice issued recently by the Dutch government which has resulted in the withdrawal of the Dutch engineering firm Royal Haskoning DHV from a sewage treatment project with the Israeli municipality in occupied East Jerusalem. This follows a decision by the German government to instruct railway company Deutsche Bahn to end its involvement in the construction of Israeli rail line running through occupied Palestinian land.

Implementing a full two way arms embargo on Israel so as to take a crucial step towards ending Israel’s unlawful and criminal use of armed force and violence against the Palestinian people and other peoples and states in the region. All military trade with Israel is in clear violation of the EU Code of Conduct on arms exports.

As long as the EU provides funds and other support to Israeli public and private entities that violate international law and Palestinian human rights, it cannot play a positive and successful role in achieving a just and lasting peace between Israel and the Palestinian people. Palestinian civil society urges the EU and its member states to fully implement the guidelines issued in July and to adopt additional measures towards ending all EU complicity with Israeli apartheid, colonialism and occupation.

Palestinian civil society warmly salutes all those whose campaigning has contributed to the EU releasing the July guidelines and other recent shifts in European policy. We look forward to working with grassroots movements, NGOs, trade unions, parliamentarians and political parties to build public campaigns that can pressure the EU and its member states to take further meaningful action.