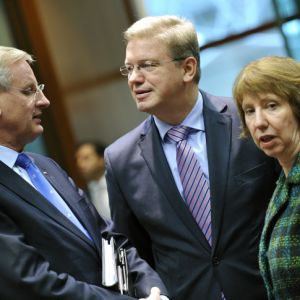 Letter signed by 15 former EU leaders counters attempts by Israel and U.S. to scrap or delay the move to stop cooperating with firms in the settlements.

A group of 15 former senior European officials has urged the European Union not to soften or delay new settlement guidelines slated to take effect on January 1, and in particular to ensure they apply to the Horizon 2020 scientific cooperation program.

One particularly noteworthy signatory is former Spanish Foreign Minister Miguel Moratinos, who is considered relatively close to Prime Minister Benjamin Netanyahu and was granted a meeting with the premier when he visited Israel a few weeks ago.

“With great concern we have taken note of recent calls to delay, modify or even suspend the European Commission guidelines on funding of Israeli entities in the territories occupied by Israel since June 1967,” the letter began. “We urge you to uphold this commitment by supporting the guidelines and their full application by EU institutions, notably in regard to the ongoing negotiations about Israel’s participation in Horizon 2020.”

After noting that the guidelines reflect a longstanding EU position that the settlements are illegal under international law, the letter continued, “Their strict application serves to reiterate that the EU does not recognize and will not support settlements and other illegal facts on the ground … It is these facts on the ground, not the guidelines, which threaten to make a negotiated solution to the Israeli-Palestinian conflict impossible.”

The letter also argued that the guidelines’ publication in mid-July encouraged the Palestinians to agree to resume direct negotiations with Israel two weeks later. “If the EU were to delay or suspend the guidelines, or not fully apply them to the agreement with Israel on Horizon 2020, this could further undermine the Palestinians’ trust in the negotiation process and their ability to continue the talks,” it said. “In other words, delaying or suspending the guidelines is likely to undermine negotiations, not help them.”

Finally, it argued, the guidelines are the “minimum” the EU can do to uphold its own legislation and keep taxpayer funds from going to the settlements, so delaying or suspending them would “damage the EU’s credibility.”

The letter was written to assist the Palestinians’ counter-campaign against Israeli and American efforts to get the guidelines softened or delayed. Last week, United States Secretary of State John Kerry asked EU foreign ministers to delay implementing the guidelines so as not to undermine Israeli-Palestinian talks.

The guidelines forbid any EU grants, loans or prizes to Israeli entities with operations in the West Bank, Golan Heights or East Jerusalem. They also require any new agreement with Israel to state that these areas aren’t part of Israel, and therefore aren’t covered by the agreement.

Israel’s immediate concern is its current negotiations with the EU over participating in Horizon 2020. Participation would give Israeli researchers access to hundreds of millions of euros worth of funding. But Israel has said it can’t sign the agreement under the guidelines as they stand.

You can read the full letter here