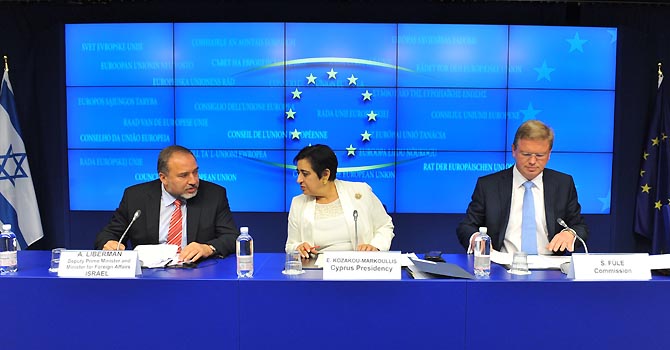 Israel Minister for Foreign Affairs Avigdor Liberman, Cypriot Foreign Affairs minister Erato Kozakou-Marcoulis and EU Commissioner for Enlargement and European Neighbourhood Policy Stefan FÃ¼le give a press conference on July 24, 2012 following an EU-Israel Association Council meeting at the EU Headquarters in Brussels. In the meetings, Foreign Minister Liberman and EU partners will discuss strengthening the ties between Israel and the EU as well as bilateral issues, and developments in the Middle East and their impact on the region AFP PHOTO GEORGES GOBET 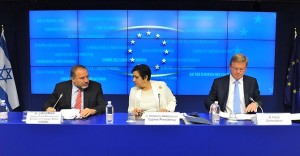 In a letter sent to the chief of EU foreign policy Catherine Ashton, 23 members of European Parliament called for the suspension of EU-Israel Association Agreement.

It is very unique that such a significant, cross-party initiative has been taken by MEP`s to call outright for suspension of the Association Agreement.

In their letter MEP`s stated that:

They also demand that “the violation of international law and human rights by the Israeli government’s activities, and the lack of response to the EU’s calls to respect international law, in particular a moratorium on settlement expansion, compels the EU to engage more deeply in a political dialogue with Israel on these troubling issues which need to be formally and duly addressed in the context of the Association Agreement”

In their letter 23 Members of European Parliament called EU to take the lead in observing international law and protecting universal human rights and to suspend the EU – Israel Association Agreement: “We therefore call upon the Commission to formally address the aforementioned concerns as soon as possible in the Association Committee, as established by article 67 of the Association Agreement and to consider the (partial) suspension of the Agreement. We also ask for your reaction and a serious proposal to address this crucial issue.”