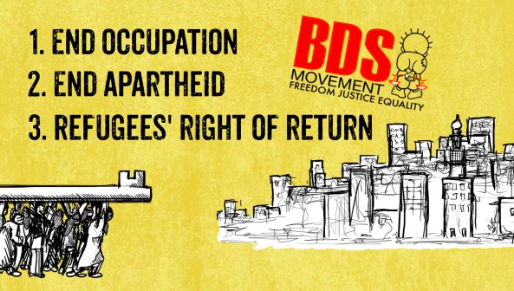 The European Coordination of Committees and Associations for Palestine (ECCP) is one of 20 organisations from around the world that fight for Palestinian rights whose members have been banned from entering Palestine by the government of the state of Israel due to their defence of Palestinian human rights and their support of the Boycott, Divestment and Sanctions movement.

The European Coordination of Committees and Associations for Palestine (ECCP) – founded in 1986 is a network of 42 European committees, organizations, NGOs, unions and international solidarity movements from 19 European countries, dedicated to the struggle of the Palestinian people for freedom, justice and equality.

Boycott, Divestment and Sanctions (BDS) is a global, peaceful movement anchored in the Universal Declaration of Human Rights, led by Palestinian civil society that seeks to put pressure on Israel to honour its obligations under international humanitarian and human rights law as demanded by numerous UN resolutions. Having failed to hinder the growing support and impact of the BDS movement in the mainstream, Israel has launched an unprecedented anti-democratic campaign to silence activism for Palestinian rights and outlaw BDS. The Israeli-induced attacks on the BDS movement include pressure on governments, legislators and officials to fight BDS activity through implementation of repressive measures that pose a threat to civil and political liberties at large. The publication of the recent so called Israel’s BDS ban list is the latest example of this policy. It follows a series of interferences in several European countries that aimed at preventing Palestine solidarity initiatives being organised in public spaces.

The right to conduct BDS activities was affirmed by the EU High Representative for Foreign Affairs, Mrs Federica Mogherini, when she stated that «The EU stands firm in protecting freedom of expression and freedom of association in line with the Charter of Fundamental Rights of the European Union, which is applicable on EU Member States’ territory, including with regard to BDS actions carried out on this territory.«

In 2012, Frank La Rue, a UN senior official, confirmed that “Calling for or participating in a boycott is a form of expression that is peaceful, legitimate and internationally accepted.”

Representatives of the Swedish, Irish, Dutch and Spanish state governments have publicly defended the right to advocate and campaign for Palestinian rights under international law through BDS.

A report released earlier this year by the United Nations Economic and Social Commission for Western Asia (ESCWA) proves beyond doubt that Israel has imposed a system of apartheid on the entire Palestinian people and calls for BDS measures to end Israel’s apartheid regime. Apartheid in South Africa was brought to an end, thanks partly to the cumulative impact of a variety of measures, including overwhelming boycotts and sanctions supported by the UN and member states.

The European Union and European governments must condemn this latest crackdown on peaceful, nonviolent movement and take immediate steps to hold the state of Israel to account for its continuing violations of Palestinian rights through measures such as the immediate suspension of its economic and military relations with Israel. There is even more reason for EU member states to stop inviting Israeli senior officials who might very well face charges for war crimes. These officials cannot just visit one or more EU member states while some of latters’ nationals fighting peacefully for basic and political rights for the Palestinian people might be banned from entering Israel and the Occupied Palestinian Territories, not to mention the disregard by the Israeli government for Palestinian refugees’ right to return.

ECCP in its work is trying to challenge EU complicity with Israel’s ongoing violations of International Law and Palestinian rights. We are coordinating political actions, grassroots campaigns and debates at the European level, highlighting the ways in which the EU, despite its many verbal condemnations, continues to fund Israeli companies and institutions that are directly involved in the maintenance of the Israeli regime of apartheid, colonialism and occupation. We’ll continue our efforts to hold Israel accountable for its systematic abuse of Palestinian human rights and to end European complicity with Israel’s violations of international law.