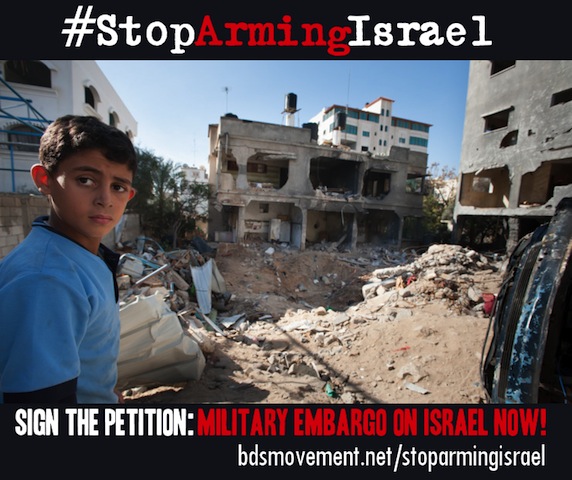 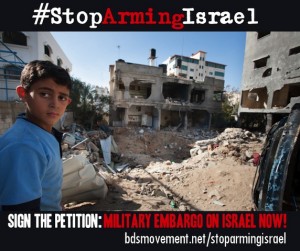 Six Nobel peace laureates and more than 90 celebrities and public figures are calling for a military embargo on Israel.

Add your name to the call now!

“With the establishment of a relationship of oppression, violence has already begun. Never in history has violence been initiated by the oppressed. …There would be no oppressed had there been no prior of violence to establish their subjugation.” –Paulo Freire

Israel has once again unleashed the full force of its military against the captive Palestinian population, particularly in the besieged Gaza Strip, in an inhumane and illegal act of military aggression. Israel’s ongoing assault on Gaza has so far killed scores of Palestinian civilians, injured hundreds and devastated the civilian infrastructure, including the health sector, which is facing severe shortages.

Israel’s ability to launch such devastating attacks with impunity largely stems from the vast international military cooperation and trade that it maintains with complicit governments across the world.

Over the period 2009-2019, the US is set to provide military aid to Israel worth $30bn, while Israeli annual military exports to the world have reached billions of dollars. In recent years, European countries have exported billions of euros worth of weapons to Israel, and the European Union has furnished Israeli military companies and universities with military-related research grants worth hundreds of millions.

Emerging economies such as India, Brazil and Chile, are rapidly increasing their military trade and cooperation with Israel, despite their stated support for Palestinian rights.

By importing and exporting arms to Israel and facilitating the development of Israeli military technology, governments are effectively sending a clear message of approval for Israel’s military aggression, including its war crimes and possible crimes against humanity.

Israel is one of the world’s leading producers and exporters of militarized drones. Israel’s military technology, developed to maintain decades of oppression, is marketed as “field tested” and exported across the world.

We call on the UN and governments across the world to take immediate steps to implement a comprehensive and legally binding military embargo on Israel, similar to that imposed on South Africa during apartheid.

Governments that express solidarity with the Palestinian people in Gaza, facing the brunt of Israel’s militarism, atrocities and impunity, must start with cutting all military relations with Israel. Palestinians today need effective solidarity, not charity.