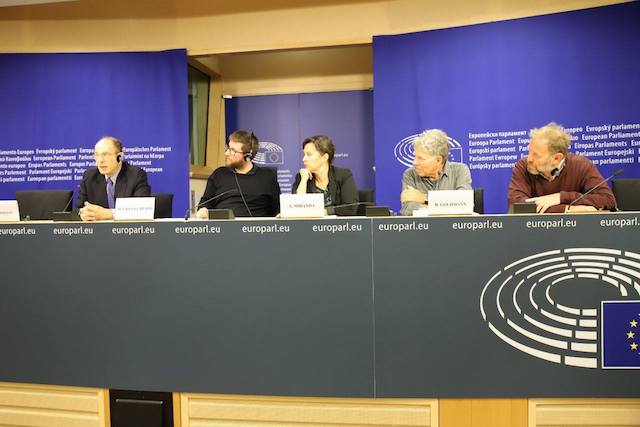 On November 6th representatives of European Jewish organisations and Members of the European Parliament from GUE/NGL and Green parties organised a press conference at the European Parliament voicing their concerns over the organization of a meeting in Brussels backed by the Israeli government, aiming to label legitimate criticism and protest against Israeli governmental policies, including through Boycott, Divestment and Sanctions (BDS) tactics, as anti-Semitism.

The meeting, co-organized by the European Jewish Association and two Israeli ministries, had as its goal to persuade all European political parties to sign up to “red lines” that declare legitimate calls for pressure on Israel, including through Boycott, Divestment and Sanctions (BDS) tactics, to be “fundamentally anti-Semitic.”

“The BDS is a peaceful and non-violent struggle that helped to turn down apartheid system in South Africa. It will do so in Palestine as well» – said Miguel Urban MEP (GUE/NGL) at the press conference in the European Parliament in Brussels.

Ana Miranda MEP (Greens) said that “the criminalisation of solidarity has increased in recent years, an example is the time when European parliamentarians were kidnapped during the boarding of a Gaza flotilla (…) I declare my full support to the BDS movement, I am a part of this Palestinian-led movement for freedom, justice and equality that urges action to pressure Israel to comply with international law.» she added.

«We are very concerned about the recent attempts to use false allegation of anti-Semitism to limit and criminalise legitimate criticism of Israeli government policies by peaceful, civil society organisations» said Bart Staes MEP (Greens). “Every time I come back from Palestine, I have to admit that the situation is getting worst there, that’s why the call for boycott is becoming more and more urgent.” – he concluded.

“Not in our name”

Arthur Goodman from European Jews for Justice for Palestinians denounced recent attempts by some European countries and European Institutions to adopt the International Holocaust Alliance’s (IHRA) Working Definition of Antisemitism.

« The International Holocaust Remembrance Alliance (IHRA) definition of antisemitism, which is increasingly being adopted or considered by western governments, is worded in such a way as to be easily adopted by western governments to intentionally equate legitimate criticisms of Israel and advocacy for Palestinian rights with antisemitism, as a means to suppress the former. It is a very dangerous step» he added.

«We stand against all forms of oppression, but the fact that the Palestinian oppression is exercised in our name is particularly intolerable for us, as we call for a cosmopolitan, internationalist Judaism that supports other minorities». said Henri Goldmann from Progressive Jewish Organisation of Belgium.

In a statement issued last week 14 European Jewish organisations called on European institutions, including the European Commission, the Fundamental Rights Agency (FRA) and members of the European Parliament to « shun attempts by the Israeli government to use false allegation of anti-Semitism to limit and criminalise work by civil society organisations, including those of diverse Jewish communities of Europe, to pursue peace and justice in Israel/Palestine. »

« In the context of growing Israeli governmental ties with racist, sexist and xenophobic leaders, groups and political parties in Europe and the US (some of which with a past marked by blatant anti-Semitism), there is a real threat of emergent anti-Semitism. The Israeli governmental conference organised in Brussels is not searching for much-needed solutions to this threat. Sadly, it seeks instead to leverage anti-Semitism to maintain an untenable status-quo of occupation, oppression and fear in Israel/Palestine. We stand in opposition to their mission. » – they wrote in their statement.