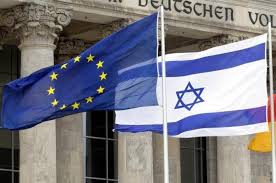 On 24-26 June, 37 european companies from 11 EU Member States will travel to Israel as a part of an EU led “Mission for growth” project that aims to “promote partnerships between Israeli and European companies  active in sectors identified as leading and developing industries in Israel.” Among Israeli companies participating in the “Mission for growth” are those deeply complicit in Israel’s occupation and apartheid policy.

The previous delegation of “Mission for growth” took place on 22-23 October last year in Israel, where 97 european companies from 23 EU Member States meet with 215 Israeli companies from the different industrial sectors.

In this open letter supported by Richard Falk, John Dugard, Michael Mansfield and Eric David, ECCP member organisations call on the european companies to abandon their plans to be involved in the project.

Letter to the participants of EU led “Mission for growth”:

We, the undersigned members of ECCP – the European Coordination of Committees and Associations for Palestine (ECCP) – a leading network of 47 organisations, NGO’s, unions and human rights organisations from 21 European countries are writing to you about your company’s participation in the recent EU-led mission to Israel named “Mission for growth” with the stated purpose of forging business ties with Israeli companies.

We are writing to make you aware about the legal, economic and reputational consequences to your business if these deals go ahead.

According to the Israeli research center, WhoProfits, Israeli participants in “Mission for growth” programme directly contribute to and are complicit in acts that are illegal under international law. For example Elbit Systems, an Israeli military company is involved in the ongoing construction of Israel’s Wall, ruled illegal by the International Court of Justice in 2004.(see Annex) Recognizing these grave violations in 2009, Norway’s sovereign wealth fund divested from Elbit Systems.1

We would like to remind you that business involvement in Israel contains legal implications. According to international law as applied in the 2004 International Court of Justice advisory opinion on Israel’s wall and settlements, third party states are violating their own obligations to not recognize nor render aid or assistance to these serious Israeli violations by allowing financial and economic activity with complicit entities. Since last year, the government of the Netherlands have taken the proactive step to warn companies domiciled in its territory of the legal implications of ties with Israeli companies with activities in the occupied territories. As a result, Vitens, the Netherlands’ largest water supplier, broke an agreement with Mekorot, Israel’s public water company, due to its role in plundering water from Palestinian aquifers in the West Bank.2 PGGM, the largest Dutch pension fund followed suit and divested from all Israeli banks due to “their involvement in financing Israeli settlements.”3

The UN Guiding Principles on Business and Human Rights, supported by the EU and adopted by the UN Human Rights Council, explain that businesses must respect human rights and international humanitarian law. The Principles also urge states to withdraw support and not procure services from companies that persistently violate human rights.4

In September 2012, the UN General Assembly adopted a report on corporate complicity related to the illegal Israeli settlements by Richard Falk, the UN Special Rapporteur on the situation of human rights in the Palestinian territories occupied since 1967. The report urges states to take steps to hold businesses accountable for their participation in Israeli violations of international law and to take steps to end business involvement in illegal Israeli settlements5

Almost all Israeli companies are deeply complicit, directly or indirectly, in the oppression of Palestinians including its IT sector by drawing expertise from Israel’s military complex and Israel’s manufacturing companies, some based in settlements, with distribution outlets in settlements, helping to sustain them.

By participating in the project and cooperating with Israeli companies involved in illegal Israeli settlements and military industry your company would be making a political decision to become deeply complicit with Israel’s violations of international law and Israel’s oppression of Palestinian rights.

As such, your company would become a legitimate target for popular boycotts, divestments, protests and sustained campaigns to penalize your involvement and causing you economic losses similar to the loses already inflicted on French-company Veolia for its involvement in the settlement enterprise and British security company G4S6. The Boycott, Divestment and Sanctions (BDS) movement, from which we draw our strength, has been growing at the global level since its launch in 2005 of which the Economist magazine says it “is turning mainstream.”7

We will therefore monitor your company for business ties with Israel and urge you to abandon potential plans to cooperate with Israeli companies violating international law and human rights.

European Coordination of Committees and Associations for Palestine (ECCP)

– Afcon Holdings– The group engages in the design, manufacture, integration and marketing of electro-mechanical and control systems. A subsidiary of the group – Afcon Control and Automation has supplied CEIA metal detectors to Israeli military checkpoints in the occupied Palestinian territories; such as the Hebron Machpela Cave Checkpoint, the Beit Iba checkpoint and the Erez Terminal in Gaza, as well as checkpoints in the occupied Jordan Valley. Additionally, in 2009 the Afcon has supplied services to the Jerusalem light train project, which connects the settlement neighbourhoods in occupied East Jerusalem with the city center. The company also supplies services to the Israeli Army, Israeli prison service and the Israeli police.10

– El-Go Team – Provider of security gates. Vehicle gates and turnstiles of the company are installed at Qalandia, Huwwara and Beit Iba checkpoints restricting the occupied Palestinian population movement in the occupied territory.11

– Elbit Vision Systems – the company manufactured electronic surveillance systems (LORROS cameras) to the separation wall project in the Ariel section. The company is a wholly owned subsidiary of Elbit Systems.12

– Netafim – A global private company of irrigation technology, which also provides services and training to farmers and agriculture companies around the world. The company provides irrigation technologies and services to the settlements’ regional council of Mount Hebron and the settlement of Maskiut. The company’s employees volunteered in the Israeli army’s combat unit Oketz. The company employs 4000 employees, owns 16 manufacturing factories in 11 states and over 27 subsidiaries and representatives in over 110 countries.

– LDD Tech – provides services to gas stations in settlements in the West Bank and in East Jerusalem.